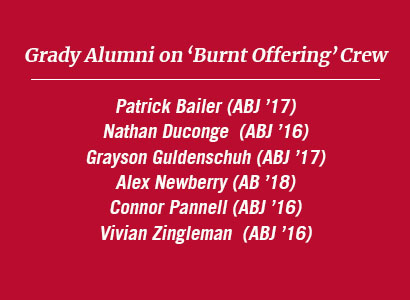 Behind the scenes of the dark, edgy production of “Burnt Offering” were several alumni from Grady College using skills that they learned during their time in school.

“Burnt Offering” is a horror/ thriller feature film written by University of Georgia graduate Jennifer Perez (AB ’03) and directed by Atlanta native, Steven Perez. The film was produced by Blackhall Entertainment in association with Barred Owl Productions and filmed at Blackhall Studios in Atlanta. “Burnt Offering” is set to release late summer 2018 and will be available on all platforms.

“This story will keep you on the edge of your seat,” said Connor Pannell (ABJ ’16). “The quality of this film proves that a Georgia-based team can execute and deliver a quality end product when the pressure is on.”

Pannell served as gaffer and second unit cinematographer. His job was to create an edgy look to generate a thrill for the film during its nine-day filming schedule. The lighting technique that Pannell had to develop during this time was staged to create a standard for the film and supplement the story of “Burnt Offering.” He did this through a lighting design of dingy greens, steely blue moonlight and yellow tones to produce a tense, vibrant atmosphere. Pannell used skills that he learned while taking classes in the Department of Entertainment and Media Studies at Grady College, which gave him the freedom to cultivate his own skills, develop lighting techniques and create his own process.

“Burnt Offering” is a film based on four teenagers who are running from the police and decide to hide in an abandoned schoolhouse. The teens soon realize that they are not the only ones there.

Pannell encourages UGA students who are looking to pursue a career in the film industry to find a specific skill and master it. He suggests that working with others and creating content to constantly post on different social media platforms, will get ambitious graduates noticed.

“Do it for yourself and own the story,” said Pannell. “Being diplomatic, honest and unapologetically yourself creates an atmosphere where the right people are magnetized to you and your work.”

Pannell got involved with the production of “Burnt Offering” through the director, Steven Perez. They worked together on previous film sets and had similar visual taste. Pannell has been interested in the film industry since he was a child. He grew up watching many films with his parents, which gave him a wide-ranging experience. Being able to view a variety of films shaped the desire for Pannell to capture a good story for others to enjoy.

“I’d work with Steven and my fellow Grady alums a thousand times over,” said Pannell. “The creative dialogue and bond among us throughout the film is really what people dream about having in this industry.”

There were several other Grady College alumni involved in the production of “Burnt Offering”: