Two years after graduation, Blake Mitchell (ABJ ’11, BBA ’11), made a big professional pivot — moving from a job in the film industry to one that centered more on human connection. 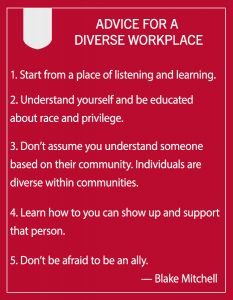 “I realized that one of my strengths that aligned with my values was working with people and investing in them in a positive way,” Mitchell says of his shift. “I never thought I would do human resources but I do feel like I can have a positive impact on folks which is really important to me.”

Mitchell is making an impact through his role as people manager at Google at their headquarters in San Francisco. His role focuses on retention and progression aligning with diversity and inclusion initiatives for the tech company, including those in the LGBTQ+ community.

Working with this group is particularly important to Mitchell who identifies as a gay, queer man.

Mitchell leads a team focused not as much on recruiting employees with underrepresented backgrounds, but on keeping them once they join the organization. His team provides them support through programs like one-on-one consults and specific strategies to determine how to make things more equitable at work, encourage paths to promotion and maintain retention. This focus on retention is relatively new way of supporting employees, Mitchell admits, and Google has a dedicated and progressive program of support.

“We have found that when we can build trust and demonstrate that we are there to support our employees, this improves outcomes,” Mitchell continues. “I am kind of like a corporate counselor.”

Mitchell said that months like LGBTQ+ Pride month are important for those in the community to be visible and supportive particularly for young people questioning their value and place in the world.

“We need to have a place to say you are important and loved and there is a place for you where you can be accepted. There is a community out there and you are not alone.”

Mitchell credits his involvement in a myriad of activities while a student at UGA with equipping him with the skills needed to lead DEI initiatives. He was a dual mass media arts major, now Entertainment and Media Studies, and international business and finance major through Terry College. He was involved with Student Government Association, Leonard Leader Scholarship program, the UGA Visitor Center, student mentorship and Grady Ambassadors, among others.

He continued: “Fortunately, my involvement allowed me to flex some of my leadership skills through my volunteer work and team activities. My formal leadership strategy helped me identify my leadership values, as well.”

With his degrees in hand, and a summer at Cannes Film Festival and several film-related internships on his resume, Mitchell started in the film industry but acknowledged soon afterward that he missed connecting with others. While researching his next move, Mitchell networked with a friend who was a recruiter at Google for advice. Soon another path was evident and he started at an entry level position in human resources. He has spent the past eight years in various roles, many which focus on diversity and inclusion. He now leads the team that is also focused on expanding YouTube’s diversity strategy.

“Exposure to different individuals and being able to continually learn from them is an important way of understanding the world,” Mitchell explains about the balance of this work and his activism that accelerated with the racial reckoning last summer. “If I was standing on the sidelines and not contributing to what was happening in a productive way and using my voice and privilege to make change, then I was doing myself a disservice to those values that I spoke to around valuing equity and diversity. I learn things from both that are helpful. Both are about disrupting systems and structures that are in place that are limiting people of diverse backgrounds from being successful.”

Mitchell is also a drag performer who entertains under the name Mary Lou Pearl. Much of his work as a drag performer raises money for the activism groups he supports including the San Francisco AIDS Foundation. He also hosts events at Google in drag so people can ask questions and learn.Mitchell says his best advice for working with people who are diverse or those in the LGBTQ+ community is to continue listening and learning.

“We should start from a place of listening and learning,” Mitchell advises. “It’s important to understand yourself and be educated about race and privilege. So many groups experience the world differently and as with any community, individuals are super diverse within communities. Don’t assume you understand that person based on their community. As we get to know new people, be very open to what their experiences are…and how we can show up and support them.”

Mitchell concludes by encouraging students to show up and support underrepresented groups.

“Allyship is such a huge way that change happens by people who aren’t in these groups. Don’t be afraid. Being an ally to one person goes so far in helping them and helping to advance the support.”