When The Industry was created in the fall of 2018, then-freshmen Ashton Bruce and Emily Minnick had no idea they’d be running the club in the middle of a pandemic during the last semester of their college career.

The Industry provides a variety of opportunities for students to connect with each other as well as recent alumni in the entertainment industry. Due to the coronavirus, Bruce and Minnick had to adapt, moving club meetings on Zoom and complying with department standards to limit student production crews.

Bruce is a third-year from Dawsonville, and Minnick is a fourth-year from Canton. Both will be graduating this spring.

The club works to send out cast and crew calls for student film productions and conducts a small writers room, where a handful of students peer edit scripts and work with Professor Matthew Evans to find their screenwriting voice. They also host screenings of student work and Q&A events and panels with industry professionals.

Despite the challenges, both Bruce and Minnick said there’s been a silver lining for their club in the middle of the pandemic. They’ve heard from new speakers and actively engaged with new club members.

“I think our numbers have done really well to sustain considering that we’ve gone entirely virtual,” Bruce said. “I’m really happy with how we’ve grown through the pandemic.”

The Zoom meetings have included more appearances from industry professionals outside of Atlanta, like Los Angeles and New York City. Post production and writer’s rooms for television are based in Los Angeles, Minnick said, so students who are interested in those specific areas can understand the different career possibilities on each coast.

“I think it gives people who are interested in the industry but don’t know where exactly they want to settle a better insight to make decisions for their future,” Bruce said.

The remote workforce has expanded within the entertainment industry due to COVID-19, but upcoming graduates are nervous for their future careers. While Bruce and Minnick admitted that’s always been a pre-pandemic reality, they feel just as prepared to graduate in part because of the emphasis the EMST department has placed on safe productions that mirror the industry itself.

Some of the new logistics to produce student films include downsizing crews and placing an emphasis on working with others near your bubble who follow COVID-19 safety precautions.

The pandemic has also changed how entertainment and media studies students tell their stories. Minnick explained scenes between characters have become less intimate to allow for social distancing, and typical themes cover isolation and technology. When the pandemic hit, Bruce and Minnick had just begun their second semester in the major, which means they still don’t know the reality of producing without these guidelines.

They hope the changes they made because of the pandemic will help make the club more accessible in the future to students who wouldn’t have been able to attend meetings previously. Minnick said having online meetings and presentations would have helped her get involved earlier.

“There was a lot of hesitation, being like a first-generation college student, not being familiar with the film industry at all and also being a woman in film,” Minnick said. “I think I felt very scared to put myself out there and just like go for it. So you know, very much encouraging people to get in on it as soon as they can and not being afraid.” 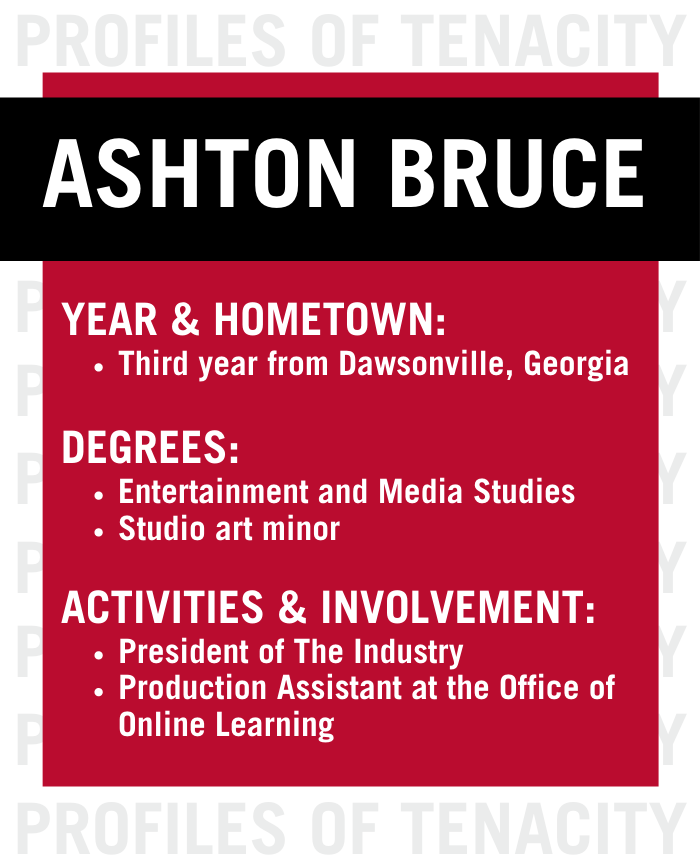 Education. A big part of my work at the Office of Online Learning is assisting professors in making engaging content for their students. I feel like I gain knowledge about a variety of subjects just by being behind the scenes. I get the opportunity to learn about subjects that I never would have taken classes for when editing video content for these online courses–business law, anthropology and more. In editing and filming these lectures and interviews, I learn not only about the subject matter our faculty is so passionate about but also the diversity in the experiences of our faculty. I’ve always been the kind of person who knows a little about a lot, so it really appeals to me and makes me feel fulfilled to work there.

What is the last show you binge-watched?

The Great British Baking Show! I was late to the game, but I couldn’t stop watching once I started.

What has been the hardest part about adjusting to COVID-19 in your life as a student and future professional?

The hardest part of COVID-19 as a student and future professional was watching the entire entertainment industry by and large shut down. The arts are probably the first industry to shut down and will likely be the last to open up. The line of work I chose and wanted to do felt truly non-essential.

As we spent longer in quarantine, it felt like media was the only thing keeping me tied to people. There were so many eras in the COVID-19 pandemic based around what people were watching–Tiger King was definitely the biggest. Since we weren’t doing much beyond not leaving our house, my friends and I talked most about the movie or TV show we finally had the chance to watch. We stayed connected through Netflix watch parties and TikTok. I kind of had the realization that media isn’t essential to the function of society, but it is integral.

It would surprise high school me to know, but I’m definitely a morning person.

Knowing what you know now, what would you tell yourself before you began taking classes?

All of what you learn now in your introductory classes is foundational. Take it seriously, and really learn. Once you have a solid understanding of the basics of the industry’s structure and history, it allows you to make connections to current challenges that advance your understanding of the material you learn in class completely. You’re not learning what you’re learning to pass a test; you’re learning it to have conversations with the professionals in that industry.

Proudest moment in the last year?

My proudest moment this year was watching my name appear on the end credits of the biggest–and probably best–independent film I’ve worked on to this date called ‘Let’s Never Speak of This Again.’ I was the first assistant editor for that film during my sophomore year.

When post-production finished and we’d had our wrap party, the producer and director had arranged to premiere the film for cast, crew and friends at the Tate Theatre. Being able to cheer for my friends’ names and my own name on the big screen was a very exciting experience.

What is the best piece of advice you’ve received from an instructor/mentor/family member?

When I was in Dr. Hamilton’s Entertainment Media and Popular Culture course–the first class you take as an EMST major–it was my first semester of college. I came into college bashfully undecided. Yes, it can feel scary when asked what your major is, and you have to admit that you don’t know. So, I was taking the course to figure out if this was something I would even be interested in doing (hint: it was).

Dr. Hamilton invited Katiedid Langrock, a now local screenwriter whose work on children’s television has been featured on Disney, PBS and Netflix, to speak with the class. At some point during the presentation, she said, “Think of networking as just making friends. Just be nice to people, and you’ll make friends. That’s how this industry works.”

At the time, I thought it was a nice idea. As I got more involved in my major, college and work experiences, I had more and more encounters where I had to face the challenge of networking. Changing the way I thought of networking because of Langrock made the experience way less intimidating and even fun. As president of The Industry, a UGA club designed to provide networking for future entertainment players, it’s the piece of advice that I give to every member who asks me how to network. Be nice, and make friends.

I could probably eat from Thai Spoon every day if my wallet would let me!

What are you planning to do after graduating?

I absolutely know I want to work in post-production, so my goal after graduation is to move to Los Angeles and take steps to become an editor for television. Maybe it’s the COVID-19 binge watching right now, but I love the idea of being an editor for reality baking competition shows.

My favorite UGA memory is from my freshman year when I went to the Rocky Horror Picture Show performance at the Tate Theatre with my mom and little sister. My mom remembers when Rocky Horror came out and how she’d go to the live shows when she was my age, so she really wanted to go. We were musical theatre junkies but had never actually seen most musicals–like Rocky Horror. So, my sister and I getting a ‘V’ marked on our forehead before the show with my mom is a fun memory for me.

The #ProfilesOfTenacity series–formerly the #GradyGrit–is a set of student features highlighting the strength, determination and leadership of students in Grady College. Stay tuned to see how #ProfilesofTenacity evolve in the future.