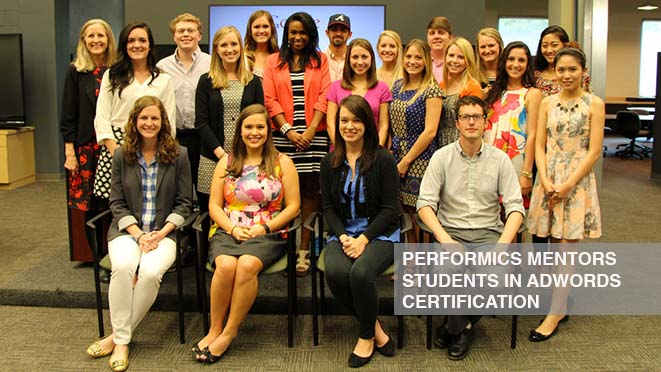 Fifteen Grady College undergraduate and graduate students during the spring semester studied the process of buying keywords for search engine marketing with the help of industry leaders through an educational partnership with Performics, a global performance marketing agency specializing in search, social, display, and affiliate channels.

The mentorship program, which concluded its third year, helps students navigate the complexities of online advertising—such as how to implement a campaign, then modify and optimize it over time—in preparation for certification exams.

“Digital marketing changes every day, it keeps evolving,” said Elaine Lin, an assistant professor of advertising who coordinates the partnership. “In line with the university’s mission of experiential learning, this is a great opportunity for students to get more real world experience.”

Eight mentors, many of whom are Grady alumni, visited campus weekly after hours in March and April and were available virtually to guide the students. Using a small account provided by Performics, students worked in small groups to place paid search ads promoting the official Grady College website, Grady Centennial website, Summer at the Circus learning partnership, and student-run agencies Creative Consultants and Talking Dog

“It’s important that we have the real budget for the campaigns,” said Lin.  “In a classroom setting, we talk about paid search advertising, but students never really get to experience how it works.  It’s hard for them to think about how to get an effective message out.”

Claire Doiron (ABJ ’10), media director at Performics, has served as a mentor since the program’s inception.

“Learning advertising from a textbook is really difficult, so we’re able to come in and supplement their knowledge with real world scenarios,” Doiron said. “Understanding data and advertising’s role in a business will absolutely set them apart in interviews. We’re really looking forward to their success.”

Doiron continued, “My favorite part of the program is actually the small group portions where we talk about interviews, career path options, and advice for standing out in the industry. We like to touch on things that they want to know but haven’t had the right forum to ask.”

Before participating in the program, Shelby Clayton said she didn't know how lucrative and effective paid search advertising could be.

“The mentors were so helpful in answering all of my questions (which I had many),” said Clayton. She is pursuing a career in sports media and marketing, eventually hoping to work in corporate outreach. “This program has developed my mind to think critically and analytically to solve problems as well as make key business decisions. I am able to effectively look at data and interpret it to form a conclusion, which is an essential part of market research and digital media.”

“My biggest challenge was wrapping my head around optimizing accounts,” said Hayley Hinson. “I understood how to create an AdWords account and get it up and running, but tweaking the accounts to improve them was challenging.”

Shortly after graduation earlier this month, Hinson started her career as a digital sales planner at Comcast Spotlight in Atlanta.

“I think that the AdWords program gave me a better overall grasp of digital advertising, she said. “I think I am far more prepared to start working in digital media because of my experiences with Performics.”

Applications for the 2016 Performics mentorship program will be available in January.