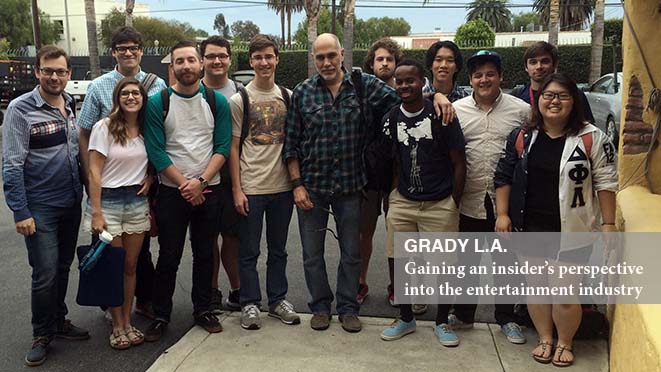 Students representing all Grady College majors are learning the ins and outs of the entertainment industry this summer in Los Angeles through a combination of academic instruction and internship experience.

“I absolutely love to see the students grow through the program as they learn about, and work within, the entertainment industry,” said Jennifer Smith, an associate professor of mass media arts who directs Grady L.A. “After eight weeks in Los Angeles, they no longer view it as an impenetrable, mysterious industry. They understand how to navigate their way into a career in entertainment and gain the confidence through internship experience, industry connections, and L.A. alumni support to succeed in achieving their goals.”

The 24 students work at their various internships on Mondays, Wednesdays and Fridays.  On Tuesdays and Thursdays, they spend two hours in an Industry Studies course taught by adjunct professor and on-site program coordinator Andres Rosende, an award-winning director and writer. The class explores the entertainment industry from the Hollywood perspective, including historical, traditional, and new trends in industry practice.  Students also visit entertainment companies, studios, sets, screenings and more.

“It’s cool seeing people your age doing amazing things,” said Jaron Matthews, a digital broadcast journalism major interning at Discover Talent Management. “They really gave me the courage that I could do anything if I made the right connections and worked hard. I feel like I could always depend on them for advice and if I’m getting down on myself about my career and other endeavors that I could reach out to them for support.”

Another highlight of the first few weeks of the program was the Los Angeles Film festival, where students attended the North American festival premiere of “Inside Out” including a post-screening discussion with director Pete Docter, and participated in an master class with editing team Maryann Brandon and Mary Jo Markey (“Star Trek”, “Super 8,” “Star Wars: The Forces Awakens”), among other activities.

Pretty People after an amazing movie and conversation with director Pete Docter! #ugagradyla

“I liked hearing the director behind ‘Inside Out’ speak before the movie. It was amazing to see his inside process and how he came up with all the story lines and how they go about translating that into a movie,” said magazine journalism major Suzanne Belk.

Her internship at Revelations Entertainment has also been an eye-opening experience for Belk. “I'm really starting to learn how difficult and long of a process it takes to make a movie or TV show, but instead of being intimidated, I'm really fascinated by all that goes into the process and how it takes so many different people.”

Prior to Grady in L.A., public relations major Leah Moss, who grew up in a small Georgia town, hadn’t considered a career in L.A. as a viable opportunity for her. But now “that dream is becoming a reality,” she said.

While interning at ID PR in the creative services department, Moss is honing essential skills such as writing biographies, creating messaging for brands, and handling crises.

“Grady L.A. is a unique opportunity. It has helped me mature on both a personal and a professional level,” she said. “It is one of the best decisions I've ever made.”

Josh Jacobs, a mass media arts and English double major, is spending much of his time at his internship at Color Force reading books and spec scripts and writing coverage on them.

“One of my goals with this internship was to learn how films go from the idea to the production phase, so I feel like I've been learning about that a lot so far,” Jacobs said. “I also want to improve my own writing skills, and I think by reading so many scripts, I'll learn more about what to do and what not to do.”

Often shy when meeting new people, mass media arts major Jennifer Kim said the program has brought her out of her shell.

“It took me out of my comfort zone and into the heart of Hollywood,” said Kim, who is interning at NBCUniversal. “I am networking with some of the best leaders in the industry as well as Grady alums who only want the best for us.”

“I see Grady L.A. helping me to attain my career goals on a more personal level than just resume building,” added Emma West, a public relations major interning at Tuff Gong Worldwide, Ziggy Marley's record label.  “Already in the few weeks that I've been here, I've seen a drastic improvement in my leadership skills, in my passion to think and feel independently and have gained the courage to believe in my dreams. This program has given me the room to become the person I've always imagined myself becoming, while also providing me with a safe haven of close friends to take part on this journey with.”

Smith, who designed the Grady L.A. program in 2012 and has fostered its growth since, said she’s proud of the impact it has on students.

“When I tell people in the industry about our students’ internships and our recent alumni’s jobs, they are thoroughly impressed with the level of their achievements,” Smith said. “Many of them are doing work at a level that others might only hope to reach after a much longer period of time.”