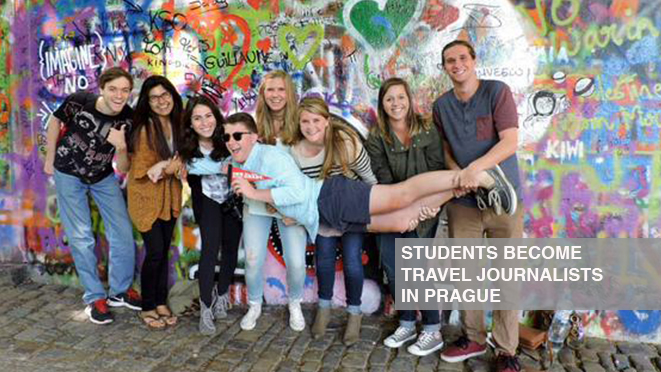 “As the world shrinks due to our more mobile society and the reach of the Internet, I believe it is increasingly important for young journalism students to know and understand the world outside of our American paradigm,” said Dodie Cantrell-Bickley, director of the 2015 program, which was held May 11-June 2.

Travel Writing is the lowest-cost study abroad opportunity offered at Grady.  It was created by John Greenman, the first Carolyn McKenzie and Don E. Carter Professor of Journalism, who recently retired from teaching. Cantrell-Bickley's decades of experience in television stations and as an instructor in Eastern European newsrooms after the fall of Communism prepared her to take over leadership of the program.  Carolyn Crist (ABJ ‘10, MA ‘14) again served as program assistant and website manager.

Cantrell-Bickley kept much of the course’s original structure, but placed extra emphasis on visual storytelling.

“While researching and writing the story are the foundational elements, in today's world, visuals count,” said Cantrell-Bickley, a lecturer of journalism and co-executive producer of Grady Newsource. “A fully trained journalist—whether the individual focus is magazine writing, or television news reporting—must be competent in producing engaging and worthwhile stories on every platform.

“My goal was for those students who focused on writing to become comfortable with video and for those who perhaps were overly reliant on video to strengthen their writing skills.”

And students rose to the challenge, she said.

“Each story had some sort of visual element; slide shows, video interviews, and in one case, a full video package. Some of the students discovered they had quite an eye for video and watching a young journalist explore and delight in a previously unrecognized talent is a joy.”

Each student produced an issue-oriented in-depth report on topics such as gender equality and Roma segregation, complete with multimedia elements and social media assignments.  Students also contributed to the destination guide “36 hours in Prague if…”, which began with the 2013 class.

For Lauren Herbert, a digital and broadcast journalism major who dreams of becoming a news anchor, the most meaningful assignment was a piece in which she interviewed a 72-year-old Czech woman.

“I watched her sit idly behind an aged, dark wooden desk, waiting for visitors to hand her entry tickets to Prague’s Museum of Communism,” Herbert recalled. “Through her broken English, she explained how she doesn’t look back on her 41 years under communist rule with resentment, but reminisces on the unification of society under one common goal— to overcome poverty.

“I not only learned writing/video skills on this trip, but I was taught a valuable lesson from a Czech native, that truly is a lifetime experience,” Herbert concluded.

Names of other students who participated in the 2015 program and links to their work appear below.

“What was especially gratifying was to see how, in a relatively short period of time, these students grasped and executed their assignments. They made mistakes and they learned from them quickly,” said Cantrell-Bickley. “They were also a credit to UGA and the profession since they comported themselves as young professionals during their time in Prague.”

“My time studying abroad in Prague taught me to get out of my initial comfort zone, embrace myself in a foreign country, and learn the necessary skills for gathering information despite any language barrier,” Herbert reflected. “Most importantly, this program validated my decision of pursuing a major in digital and broadcast journalism. I start Grady classes in the fall and with this program as my backbone, I will be in front of the learning curve.

“My time here showed me how important being a journalist truly is – we are the ones that gather information and relay it to the world,” she said.