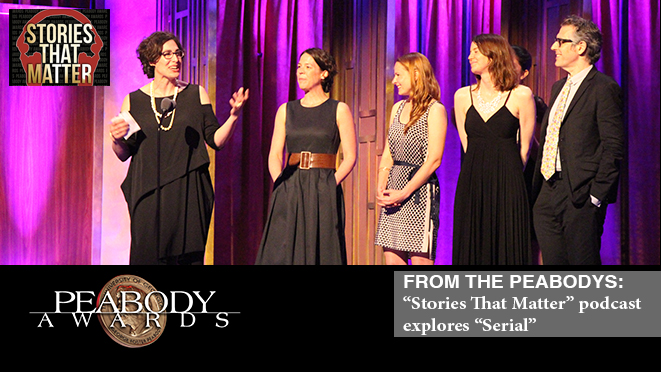 It’s not often that the same group of people revolutionizes two different mediums.

Since its first Peabody in 1996, This American Life changed the rules for storytelling on public radio by “captur[ing] contemporary culture in fresh and inventive ways that mirror the diversity and eccentricities of its subjects,” as stated in that year’s Peabody Award citation.

Nineteen years and six Peabodys later, This American Life is changing the rules for yet another medium. Podcasting, just 10 years old, has not even reached its adolescence as a technology. Thanks in a large part to Serial (a This American Life production), podcasting is coming of age, stepping out of its secluded niche of millennials’ iTunes folders and AV Club reviews into the broad light of the mainstream.

Taking a cue from the current flood of critically acclaimed prestige TV shows, Serial trusted its listeners to follow a detailed-laden, 12-episode season. It worked. The difference is the events in Serial actually happened. Season one is a rigorous excavation of the trial and conviction of Baltimore teen Adnan Syed for the 1999 murder of ex-girlfriend Hae Min Lee.

In Serial, the questions outnumber the answers. That’s part of what makes the show’s wild popularity so remarkable. Rushing headlong into the complexities and confusion bound up in the U.S. legal system, Serial didn’t just hold the audience’s attention. It became the first blockbuster podcast, picking up countless listeners who had never heard, or even heard of, a podcast. In the process, it also became the first one to win a Peabody. The Board of Jurors described the first season of Serial as “a soulful examination of reasonable doubt in homicide trials” and a “compelling, drilling account of how guilt, truth, and reality are decided.”

Matt Shedd visited the This American Life studios in New York City to find out why co-creators Sarah Koenig and Julie Snyder felt Adnan Syed’s story needed to be told.