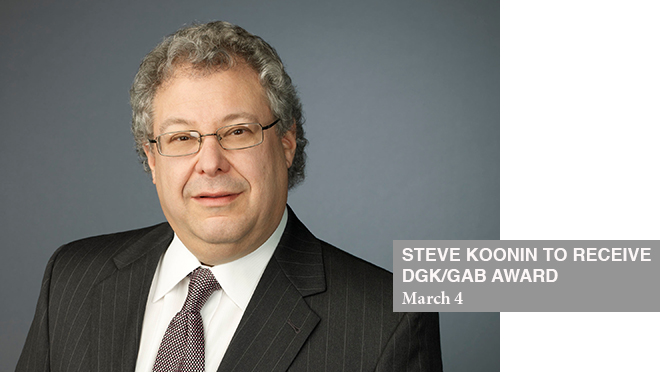 The University of Georgia Grady College of Journalism and Mass Communication’s national broadcast society, DiGamma Kappa, will present Steve Koonin with its Distinguished Achievement in Broadcasting and Cable award March 4 at 6:30 p.m. at the UGA Hotel and Conference Center.  Koonin is the president of Turner Entertainment Networks.

The award, which is presented by DiGamma Kappa and sponsored by the Georgia Association of Broadcasters, will be given to Koonin during the annual DGK Honors Reception and Dinner.  Several Grady College students will also receive scholarships that evening.  The event is part of the annual GAB Winter Institute at UGA, an event that attracts broadcasters from around the state.

“Steve Koonin is one of the most creative and innovative leaders in the media industry,” said Ann Hollifield, head of the Department of Telecommunications at Grady College.  “His many achievements exemplify the values of excellence, creativity and impact through media that DiGamma Kappa seeks to engender in its members.  Steve also has been an outstanding friend and supporter of the Grady College and its students. DGK’s 75th anniversary is the perfect time to recognize him and to celebrate his many contributions to our industry and our students.”

At TEN, Koonin oversees the programming, marketing, strategy and operations for the company’s four strongest brands: TBS, TNT, truTV and Turner Classic Movies.  Prior to joining Turner in 2000, Koonin worked at The Coca-Cola Company.  Under his direction, TEN has received a total of 122 Primetime Emmy nominations, 20 Golden Globe nominations, and four Peabody Awards.  Koonin has been named one of the “Smartest People in Television,” by Entertainment Weekly, and TV Guide has featured him in its “Power List.”

In addition to the dinner, the GAB Winter Institute hosts a variety of panels, discussions and career guidance sessions for students.  This year’s theme is “Emerging Technologies and the Impact on the Future of Radio and TV.”  Other highlights of the conference include:

• Connected Car Town Hall Meeting (2 p.m., March 4, Grady College Drewry Room): featuring Fred Jacobs of Jacobs Media discussing the future of radio and its relationship to the digital dashboard.   Two cars will be available to view and representatives from car manufacturers in Detroit will be on hand to talk about the applications.  A panel will follow the presentation focusing on new technologies and their potential in broadcasting, audio listening habits and media usage.  This is event is free and open to the public.

• GAB Hall of Fame Luncheon (Noon, March 5, UGA Hotel and Conference Center): featuring a keynote address by Kelly Cole, GAB national lobbyist and National Association of Broadcasters senior vice president for government relations.  Hall of Fame inductees include Paul Beliveau of Georgia Farm Bureau, Georgia Farm Monitor anGeorgia Farm Radio Network; Bill Cathcart of WTOC, Savannah; and John Pruitt of WSB, WXIA, Atlanta.  This is a ticketed event and tickets can be purchased for $40 by emailing fwilliamson@gab.org.  The Grady College is the host of the GAB Hall of Fame and plaques featuring previous winners can be viewed in the hallways on the first floor of the Grady College.

• Career Fair (2 to 4 p.m., March 5, Miller Learning Center, fourth floor): participants in the GAB institute are joined by other journalism and mass communication employers to talk with students interested in internships and full-time employment.  More than 20 employers are expected to attend.

DiGamma Kappa celebrates its 75th anniversary this year.  It is the nation’s oldest student broadcast society and was founded at UGA Grady College.

The Georgia Association of Broadcasters is the trade association representing the interests of Georgia’s over-the-air radio and television licensees.  GAB provides technical, regulatory and advocacy support to our members as well as offering continuing professional enrichment opportunities designed to keep Georgia broadcasters at the forefront of serving their communities.  GAB and our member broadcasters also work with Georgia’s Department of Homeland Security and the National Weather Service via the Emergency Alert System to provide accurate and timely information before, during and after emergencies and severe weather.