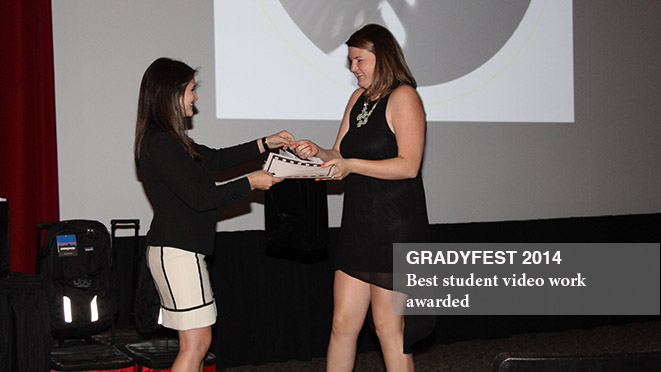 The red carpet was rolled out and freshly popped popcorn greeted a crowd of about 100 at Tate Theater on May 8 for GradyFest, a showcase of the best video works created by mass media arts and digital broadcast journalism majors during the 2013-14 academic year.

Nineteen student productions ranging from documentaries to news reports to narrative films were screened at the annual event.

Winning the Turner Best of Festival Award was “Nuclear,” a short film about two survivors of a nuclear attack navigating post-apocalyptic life in a bunker.

Just shy of ten minutes in length, the film was directed by Teague Dean and produced by Chelsea Clark.

New this year, the Dole 'Slip on a Banana' Comedy Award was presented to director Louis Galanti (ABJ '14) and producer Devyn Trottier for “Guitar Battle.”

Congratulations to festival student director Kara Maltby (ABJ '14) on a job well done and to the complete list of winners below: