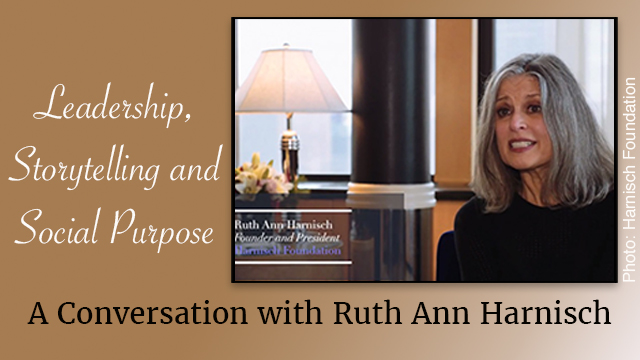 Former broadcaster and reporter Ruth Anne Harnisch will discuss the power of storytelling over lunch Nov. 8, 2017

Film screening of ‘Columbus’ to follow in the afternoon

Philanthropist and Harnisch Foundation founder Ruth Ann Harnisch will discuss “Leadership, Storytelling and Social Purpose” at Grady College on Nov. 8, 2017. The talk takes place over lunch in the Peyton Anderson Forum from 12:30 to 1:30 p.m.

Students, faculty and alumni are welcome to attend the complimentary lunch, but reservations are required by noon on Nov. 7, to Karen Andrews at karena@uga.edu.

The lunch conversation will be followed by a special screening of “Columbus,” for which Harnisch was an executive producer. There is no charge for the screening.

Most of Harnisch’s talk over lunch will focus on her work advocating for stories that change the way people view the world and giving women the power to make change.

“Leadership starts with the self — that one’s social purpose is informed by one’s carefully considered personal values,” said Harnisch. This includes “how one does that inventory and sets one’s course, and finds one’s community/tribe is the key to planning how you will lead and have social purpose.”

Harnisch will be interviewed by Grady Fellow Harry Chapman (ABJ ’67). Jeff Jowdy (ABJ ’83), founder of the Lighthouse Counsel, will introduce the program after a welcome from Dean Charles Davis.

At 3:30 p.m., guests are invited to a screening of “Columbus” in the Fine Arts Theatre. “Columbus” tells the story of a Korean-born man who finds himself stuck in Columbus, Indiana, where his architect father is in a coma. The man meets a young woman who wants to stay in Columbus with her mother, a recovering addict, instead of pursuing her own dreams. “Columbus” is an official film selection of Sundance and the Bam Cinema Fest.

The screening will be followed by a discussion with Harnisch. Nate Kohn, associate director of the Peabody Awards, will moderate the discussion and a reception will follow.

Harnisch began her career as a journalist where she was an Emmy-nominated television reporter, the first woman to anchor Nashville’s CBS-TV affiliate and a columnist for the Nashville Banner.

After retiring from journalism, Harnisch chaired the board of More Than Money, a national nonprofit assisting top wealth-holders in “putting their money where their values are.” The organization’s coaching program piqued her interest in the emerging field and, before long, she had joined the International Coach Federation and the International Association of Coaching. She is an IAC Master Certified professional coach herself.

Harnisch’s other philanthropic endeavors include serving on Sigma Delta Chi Foundation’s Board of Trustees, the International Women’s Forum, Rachel’s Network, the National Association of Television Arts and Sciences, the Radio and Television News Directors Association, American Women in Radio and Television, the Buffalo Broadcasters Association, Women Donors Network and Women Moving Millions. She is a lifetime member of the Broadcasters Foundation and a patron of TED.

#ProfilesofTenacity: Coby Seriña
Third year public relations major Coby Seriña understands the importance of hard work and surrounding himself with good people. Throughout his time at UGA, Seriña has been able to build […]
learn more