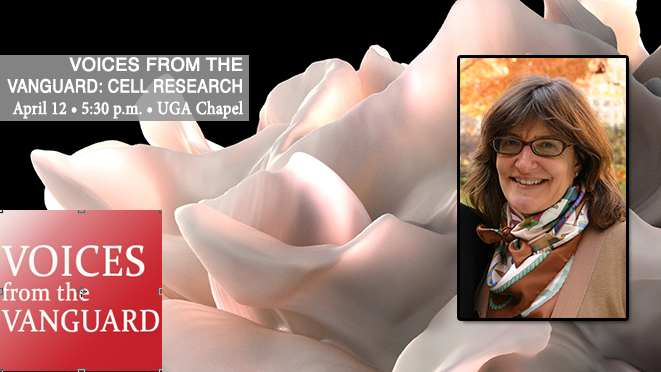 The University of Georgia’s Voices from the Vanguard 2016 series concludes April 12 as Sarah J. Schlesinger tells how novel cells that were first spotted under a microscope in the 1970s have since been recognized as sentinels, sensors and “conductors of the immune symphony.”

That’s how the 2011 Nobel Prize committee described dendritic cells, which have enabled a wealth of insights into the development of drugs and vaccines, including those aimed at preventing AIDS.

The presentation, “Dendritic Cells, HIV Vaccines and the Nobel Prize: An Amazing Adventure,” takes place at 5:30 p.m. in the University of Georgia Chapel.

Schlesinger, who was due to talk during the 2015 series and had a last-minute cancellation, has agreed to return to give her talk to wrap-up the 2016 Voices series.

Schlesinger, who has worked with dendritic cells since she was a 17-year-old high school student, will draw on more than 30 years of research and expertise in the use of dendritic cells to develop new therapies for diseases ranging from cancer to HIV.

“Dr. Schlesinger is studying one of the most central and fascinating cells of the immune system, dendritic cells,” said Dan Colley, professor and director of the Center for Tropical and Emerging Global Diseases. “The different subsets of dendritic cells are critical for the body’s initial responses to many foreign invaders and vaccines against them, as well as controlling immune responses lest they get out of hand.”

Her research is especially exciting because it combines cutting edge biomedical science on dendritic cells with the practical development of vaccines, especially vaccines against HIV.”

Schlesinger will tell how a radical idea – widely greeted with skepticism – evolved into a Nobel Prize-winning discovery. She’ll also talk about the intense, human drama involved in this quest and the untimely loss of her mentor, Nobel Laureate Ralph Steinman.

Schlesinger left New York in 1994 to head dendritic cell work for the Division of Retrovirology at the Walter Reed Army Institute of Research. She was part of an interdisciplinary WRAIR team that collaborated with researchers around the world, working to design and develop HIV vaccines. During that time, she also taught about infectious and parasitic disease pathology at The Armed Forces Institute of Pathology.

Schlesinger returned to New York City in 2002 to work with the International AIDS Vaccine Initiative, the nation’s leading non-profit organization in the field. Since rejoining The Rockefeller University that year, she has led clinical efforts to develop new HIV vaccine candidates.

The ethical testing of drugs and vaccines is another of Schlesinger’s enduring interests, and she has served on the Rockefeller Hospital’s Institutional Review Board since 2003 and is currently co-chair. She is also involved with the Rockefeller University Center for Clinical and Translational Science and the Medical Staff Executive Committee of The Rockefeller University Hospital. Schlesinger is also on the board of the AIDS Vaccine Advocacy Coalition and of Global Viral (formerly the Global Viral Forecasting Initiative).

The events are free and open to the public.