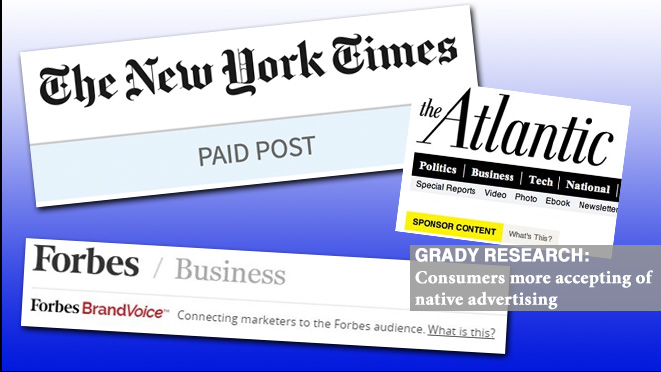 The line between online content written by journalists and story-like ads that are paid for by specific corporations can be blurry, but, according to a new study, consumers don’t seem to mind—as long as the content meets certain criteria.

In a study published recently in American Behavioral Scientist, researchers at the University of Georgia, San Diego State University and Syracuse University found that consumers are becoming more accepting of native advertisements, especially when they are sponsored by a company with which the consumer has a strong relationship or if the advertisements provide information the consumer can use.

In the past, companies worried about whether their hard-earned dollars spent on native advertisements, which look similar to the other material that surrounds it whether online or in print, were actually harming their reputation with their consumers.

“What we found is that if there is useful information contained in the advertisement and there is a recognized brand logo, then the credibility of the company is not damaged,” said study co-author Sun Joo “Grace” Ahn, assistant professor of advertising in UGA’s Grady College of Journalism and Mass Communication. “In our study we found that when we honestly tell people that a company is sponsoring the ad, their perception of that company didn’t change.”

Of the 55 respondents who knew it was an advertisement, the research indicated the relationship a consumer had with an organization was not affected when they knew the advertisement was sponsored by a brand.

“Prior research has shown that when advertisers played around in spaces like this, it would damage the relationship they had with the public, especially if they did not disclose that they were behind the content,” said the study’s lead author Kaye Sweetser, an associate professor at San Diego State University. “What we found in our study is that rather than decrease the relationship, there was no change. This is a step in the right direction for public relations practitioners who don’t want to damage the relationship, and this could eventually mean that this type of content might potentially improve a relationship.”

The native advertisement used in the study was an actual ad sponsored by a well-known company and it included some multimedia elements. According to Sweetser, the participants tended to stay on the page for an average of eight minutes even though they knew it was a sponsored advertisement.

“The main message here is that if you can create something that is interesting and use extremely compelling storytelling with interesting multimedia, you can hold people on the page,” Sweetser said.

Future research will look at how every extra second consumers spend on a page affect their relationship with an organization, as well as their perception of its credibility and their overall brand attitude.

While the study showed that brand attitude for obviously sponsored content decreased slightly, it also showed that if the content was valuable or if the consumer perceived it as being useful, participants would have a favorable brand attitude whether the sponsorship was disclosed or not. If the consumer had a positive attitude toward the brand before the survey, it led to higher perceived usefulness in the native advertisement. The higher perceived usefulness, in turn, led to more favorable attitudes toward the advertisement and ultimately toward the brand. The survey concludes that when information usefulness is high, consumers may overlook the persuasive nature sponsored advertisements typically include.

According to Sweetser, this research bodes well for future efforts by public relations professionals.

“I would love to see how these boundaries might continue to be pushed and whether we could see an increase in an organization’s relationship with their publics as a result of something like native advertisements,” Sweetser said. “Organizations can step away from the overt publicity of themselves and their products and provide deeper, longer-form, compelling storytelling that their publics may be seeking.”

Additional researchers on the study were Guy Golan of Syracuse University and Asaf Hochman of Outbrain in New York.

The study, “Native Advertising as a New Public Relations Tactic” is available online in the November issue of American Behavioral Scientist.