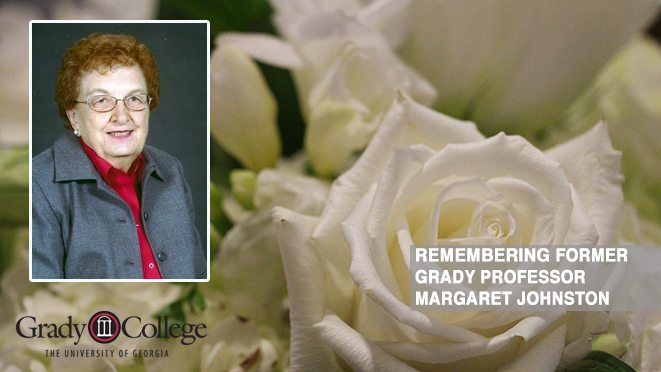 It is with heavy hearts that we announce the death of a former Grady College faculty member, Margaret Johnston, August 23, 2015.

Johnston taught at Grady College from 1968 until her retirement in 1995. During that time she was instrumental in creating the UGA chapter of Public Relations Student Society of America and directing the Georgia Scholastic Press Association from 1969 to 1995. Among the classes she taught were introduction to public relations and public relations administration.

“Professor Johnston was an amazing professor, one for whom I had the deepest admiration and respect,” said Carolyn Tieger (ABJ ’69), Grady Board of Trust member and namesake of the Carolyn Caudell Tieger Professorship in Public Affairs Communications. “While seemingly quiet on the surface, she was steely underneath with a devotion to her students that included serious one-on-one counseling about their futures. I was one of the lucky ones she took an interest in. She was well aware that back in the 60s it was hard for women to move up in the PR world, and she shared that with me. She told me one day, not to go West, but to go north to DC, where she thought I might have a better chance of success and making a difference. She knew I loved politics, and she knew there was less gender discrimination. Had it not been for her encouragement, I might have not made my decision to spend 40 years in DC, and I wouldn't be able to fund the Public Affairs Communications Chair today. She was tough, but she was also inspiring, encouraging and had a quiet but firm way of making you think you could go out and conquer the world. I adored her, and her contributions to Grady and its students were immense.”

Another Grady alumna, Lorraine Edwards (ABJ ’70), remembers her from the beginning of the PRRSA chapter.

“Professor Johnston always had the best interest of students at heart,” said Edwards, who owns Athens, Georgia-based Lorraine Communications. “She was a good writer and instilled that perfection in those who took her class. She and George Abney were instrumental in the founding of the student chapter of the Public Relations Society of America, and they made sure that we were exposed to professionals in our field, both on campus and in Atlanta. I think after our graduation they knew our success was due to their efforts.”

In an email, Dink NeSmith (ABJ '70), remembered Johnston and other Grady faculty who have passed away.

“When I walk Grady’s halls, I can’t help but mentally call the roll of those associated with my almost half-century connection with the college,” said NeSmith, president of CNI Newspapers and board member of that charter PRSSA chapter. “The list is long, all the way back to Dean John E. Drewry. I can hear George Abney’s meek chuckle and Worth McDougal’s broadcast voice. I’ll never forget Conrad Fink or his eyebrows. And, I can hear the voice of Ernie Hynds or Margaret Johnston on the phone, inviting me to visit with a new group of high school students at the annual meeting of the Georgia Scholastic Press Association. Wherever I saw Margaret—campus or church—she pulled a tidbit from the past into our conversation, and she found a way to say thank you.  Last week, I attended Ernie’s funeral. Now, this week, Margaret is gone. Young journalists just lost two devoted advocates.”

Through her work in GSPA, Johnston created the Georgia Journalism Academy in 1984, then called the “High School Newspaper Workshop.”

“Margaret Johnston's imprint on GSPA still lives on today, specifically with the Georgia Journalism Academy,” said Joe Dennis, the current GSPA director. “When it was created under Professor Johnston, it was one of the first high school journalism summer camps offered in the South and served as a recruitment tool for the journalism industry. More than 30 years later, the camp is still thriving and plants the seeds of journalism in dozens of students each summer.”

Additional excerpts from the obituary for Margaret Johnston from the Athens Banner-Herald include the following: