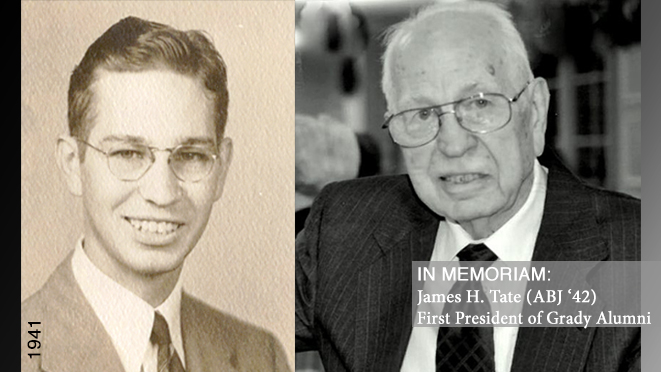 Clark and others at Grady College recognized Tate in 2010 with the college's highest honor — naming him a Grady Fellow. He was recognized as a mentor and friend to individuals and to the field of public relations. He was also acknowledged for his creation of the Shining Light Award for Atlanta Gas Light Company, among many landmark achievements.

“He embodied the spirit of the award itself, much as the Grady Fellowship embodies the best that Grady College has to offer,” said Clark.

Tate was born in Rome, Georgia, Jan. 29, 1921. After graduating high school, he attended Grady College graduating in May 1942.

On the occasion of being named a Grady Fellow, Tate reflected on his time at Grady College and the legendary Dean John Drewry:

“We came, mostly from Georgia, of course — the small cities, the little towns, the farms — naïve and unknowing in our limited and narrow views. Eager and thirsting and a little bewildered, we came to the great state University, needing a guide.

Our dean, John Drewry, became that guide for most of us, though we looked upon him with awe. What he did was to open our eyes and our minds to the possibilities ahead, showing us the many paths of journalism in all their diversity. Whereas we had a very narrow view, he painted a much broader landscape.”

The same day Tate graduated, he received an ROTC commission in the US Army as a second lieutenant, infantry — a heady assignment a mere five months after the attack Pearl Harbor. After finishing his basic officer's course, he married fellow UGA student Ellen Fayette Routledge in Sept. 1942. After the initial invasion of Normandy, France, Tate was sent in July 1944 and suffered wounds in the break out of Allied Forces. He was discharged in late 1945, but returned to active duty a month after the Korean War started in 1950.

While on duty in Korea, Tate was assigned to the role of PIO at the United Nations Korean Armistice Conference, and later as chief of the News Division of the Far East Command.

In 1955, he joined Atlanta Gas Light Co. as director of public relations. He retired 30 years later as VP of corporate communications.

He was a member of the Sigma Delta Chi journalism fraternity, and served as president of the Associates of Georgia Broadcasting Association, the Atlanta Chapter of the Public Relations Society of America and the Grady College Alumni Association (renamed the Grady Society.)

His writings include the “Keeper of the Flame,” a book about the history of AGL, as well as articles in The Atlanta Journal, Rome News Tribune, Cobb County News, Readers Digest, Army Information Digest and The New Yorker.

According to Jim Tate's obituary in the Atlanta Journal-Constitution, “he loved hearing a good story and was always ready to tell one.”

He is survived by his wife and three children.