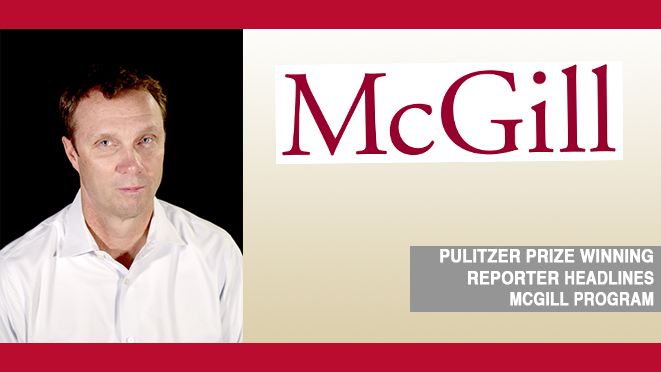 A Pulitzer Prize winning investigative journalist who has written about the mistreatment of patients at one of the country’s largest brain injury treatment facilities, fraud in the $300 billion pain industry and the riches earned by medical entrepreneurs who market dubious procedures, will give the 38th annual McGill Lecture.

David Armstrong, senior enterprise reporter for STAT, a digital publication focused on health, medicine and science, will deliver “Investigative journalism in a digital world: The end of a genre or the birth of a golden age?” on Oct. 5 at 4 p.m.  The McGill Lecture takes place in Room 148 of the Miller Learning Center and is free and open to the public.

The McGill Lecture is the capstone event of the 9th annual McGill Symposium, which will be held earlier that day in Grady College’s Peyton Anderson Forum, according to Diane Murray, who directs the McGill program for journalistic courage. Twelve Grady College students were selected as McGill Fellows to participate in the event.

At STAT, Armstrong has reported extensively on the opioid crisis, and in September, he won an Online Journalism Award given by the Online News Assocation for a feature about college football players with concussions. Armstrong previously worked in the investigative unit at Bloomberg News where he was awarded The Association of Health Care Journalists top prize for his body of work in reporting on medicine. Prior to Bloomberg, Armstrong was a reporter for nine years at the Wall Street Journal. He was part of the Journal team awarded the 2002 Pulitzer Prize for breaking news reporting for coverage of the attacks of September 11. Armstrong was a reporter for the Boston Globe from 1993 to 2000, where his investigation of safety flaws in elevators and escalators won a George Polk Award and the Investigative Reporters and Editors award.

The McGill Symposium will feature journalists discussing what journalistic courage means and how it is exemplified by reporters and editors. The symposium includes:

•     Grady graduates Mary Katharine Ham (ABJ ’03), senior writer at The Federalist and CNN contributor, and Greg Bluestein (ABJ ’04), political reporter for The Atlanta Journal Constitution will discuss “Covering elections when press freedoms are under attack.” The session will be moderated by Audrey Haynes (ABJ ’87), associate professor, UGA School of Public and International Affairs.

While the McGill lecture is open to the public, the McGill Symposium is not a public event. Limited seating is available to Grady students and faculty.

For more than three decades, the McGill Lecture has brought significant figures in journalism to the University of Georgia to help honor Ralph McGill’s courage as an editor.

McGill, while editor and publisher of The Atlanta Constitution, was regarded as the “conscience of the south,” using the newspaper’s editorial pages to challenge segregation in the 1950s and 1960s. McGill was awarded a Pulitizer Prize in 1958 for long, courageous and effective leadership.”