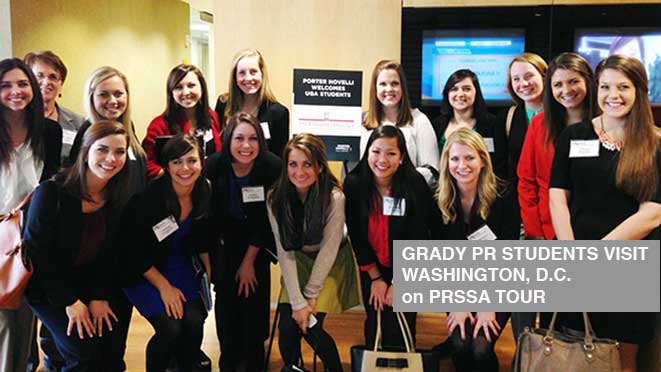 Organized by Professor Betty Jones, students had the opportunity to visit the American Beverage Association, the American Red Cross, Edelman, the Office of Homeland Security, the Pentagon, Porter Novelli, the Glover Park Group and Widmeyer Communications. Additionally, juniors visited Ogilvy and seniors had the unique opportunity to visit the Press Briefing Room at the White House.

“Seven years ago, I had an idea for a trip that would allow students to follow their career dreams to Washington D.C.,” Jones said. “Since our first visit in 2008, 16 participants have found entry-level jobs as a result of the agency tour. And, many more have completed summer internships. Thanks to the Broun Family funds, no one is turned away because of financial need.”

“I decided to apply because I heard great things about the trip from people who had gone on it previously,” said senior Stephanie Pham. “D.C. is a thriving city, so I thought it would be beneficial for me to tour the agencies there to see if it was a place I wanted to be after graduation.”

On Feb. 26, the group began their morning at the Department of Defense’s Immigration Services Communications Department. The students then made their way to Widmeyer Communications for lunch and a presentation about the agency’s various specialties. The group ended their day greeted by Naria Williams (ABJ ’12), at the Glover Park Group (GPG). At GPG, students were split into groups and given a scenario to come up with a client proposal in 15 minutes or less. The scenario was related to the high school drop out rate and the group that won focused on a simple, yet effective, brand message of “Where are they?” to win over the judges.

On Feb. 27, juniors visited Ogilvy Public Relations while seniors had the unique opportunity to tour the White House Press Briefing Room. A White House press assistant, Hannah Hawkins welcomed seniors and shared her job responsibilities and the concept of “pools” of press that travel with President Obama.

“The most memorable part of the trip was being able to go into the press room at the White House,” said senior Stephanie Pham. “It's not an opportunity that many people get to have, so I appreciated it a lot. Some of the most historic speeches have taken place at the press room and it was interesting to see how the whole process works with the White House and the journalists that report on the news there. “

The group reconvened at Porter Novelli for lunch and learned about their clients and areas of expertise. Grady alums, Mary Walker (ABJ ’13) and Allison Brill (ABJ ‘10), played an integral role in organizing the event.

Following Porter Novelli, the group ended their day at Edelman where they had the opportunity to individually meet with employees for networking and resume critiques after an interactive campaign exercise. Grady alumna Lizzie Powell (ABJ ’11) hosted the event, along with Arielle D’Avanzo (ABJ ‘12) and Jade Thomas (ABJ ’13).

On. Feb. 28, the group had the opportunity to split up and shadow professionals at different government and PR agencies, corporations and nonprofits.

“We worked all week soaking up information and networking in hopes to land a job or internship, and this was the day where we could shine,” said junior Elizabeth Howard. “My shadow experience was with Coca-Cola Corporate. The Washington D.C. Coca-Cola office is in charge of public affairs and activities that occur on the Hill. The experience was truly eye-opening, because I had no idea how much legislation could affect a drink company.”

“Burson-Marsteller was kind enough to not only allow me to shadow, but also took into consideration my interests and focus,” said Pham. “I'm most interested in digital, so they set me up with the digital department and let me speak to various people regarding digital strategy, digital analytics and digital crisis communication. I learned so much and it confirmed that area is where I want to be.”

Students regrouped later that afternoon to meet with Susan Neely, president of the American Beverage Association, to learn about trade associations. The trip ended on a positive note at the Metropolitan Club with a joint Grady College and School of Public and International Affairs alumni mixer event in which Dean Davis introduced the program and gave the students an opportunity to introduce themselves.

“I'm always amazed at how much time the professionals give our students and the interest they take in our students' future,” said Dr. Jones.

Students had the opportunity to tour the town and/or monuments every night on their own time.

Senior Hadley Dreibelbis said “my most memorable experience was spending the week truly getting to know fourteen incredible peers that will be joining me in our field. Learning more about everyone on the trip, sharing countless laughs and inside jokes and investing in each others' career successes really made me hopeful for the future. Our industry is in great hands!”

“I came home knowing more about public relations, public affairs and myself than I ever thought I could in one week,” said Howard. “I learned what the type of places that I could see myself working at, as well as the places that I probably wouldn't fit in at, and that is so important to know when starting to look for a career.”