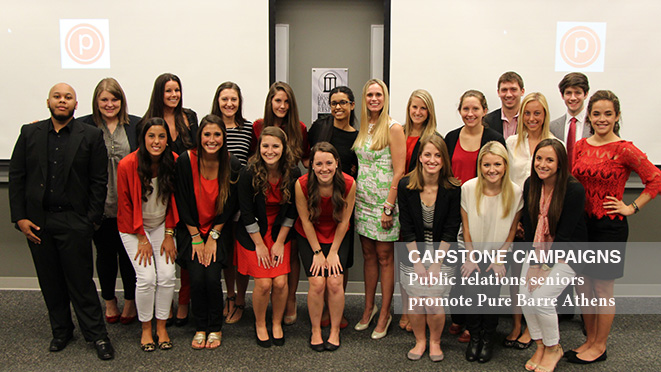 Pure Barre Athens is a boutique fitness studio that aims to empower and challenge women with its full-body workout. The Athens location was opened in September 2013 by University of Georgia alumna Connie Popwell.

After conducting preliminary research, the team identified Pure Barre Athens' greatest opportunity for improvement as the retention of clients throughout the calendar year. To overcome the challenges of the city's fluctuating student population, the team focused its efforts toward reaching the target audience of women 23 years and older.

“Evaluative research showed that as a result of the campaign we were able to increase client retention within the target audience by 187.3 percent,” said research section leader Chris Neill, a Watkinsville, Ga. native. “Additionally, new client membership within the target audience increased by 43.2 percent. This speaks to the success of the various tactics our team implemented throughout the campaign.”

In order to accomplish these goals, the campaign centered its tactics around building the presence of Pure Barre Athens within the local community.

The team planned a Sip & Shop silent auction hosted by Pure Barre Athens, allowing this new business the opportunity to give back to the community that has been so welcoming. The studio partnered with local businesses and invited them to donate auction items to the event. The Sip & Shop raised $2,100 to benefit two local nonprofits, Extra Special People Inc. and Project Safe, which also established Pure Barre Athens as a leader in corporate social responsibility.

Another tactic the team implemented was an event called Crunch & Brunch, where loyal clients could bring a friend for a free class and brunch afterward. The Crunch & Brunch was a way for Pure Barre Athens to celebrate loyal clients and at the same time bring in potential clients in a comfortable environment. Of the clients' guests, 57 percent purchased a new client special after the event.

Keeping with the consideration that word-of-mouth communication is important in engaging with potential clients, the team focused on achieving earned placements in local media outlets that appeal to the target market. The team achieved more than two million potential impressions through the media coverage of Pure Barre Athens.

Notably, the team garnered coverage in publications including the Athens Banner- Herald and The Oconee Enterprise. Additionally, Popwell was featured in a radio interview on Newsmakers with Tim Bryant on WGAU-AM. Pure Barre Athens also received coverage on digital media platforms, including features by Athens-based bloggers.

The Pure Barre Athens campaign team attributes its ability to implement a strategic plan to the knowledge the students gained through Grady coursework.

“The Grady classes have prepared us very well for working with a real client and implementing a fully-integrated campaign,” said team leader Ainsley Holyfield, a Monroe, La. Native. “The many small, stacked movements in our campaign created big changes for Pure Barre Athens in the community.”

The campaigns team was advised by Dr. Kaye D. Sweetser, APR, an associate professor of public relations at Grady College.

“The Grady campaigns experience has always been one that has pushed our students beyond their comfort level to show both themselves and the professional world what they can accomplish in a public relations campaign,” said Sweetser. “This team rose to that challenge and produced one of the most congruent, target-audience focused, visually strong and community-oriented campaigns with which I have ever had the pleasure of assisting students. This team was Pure Grady.”