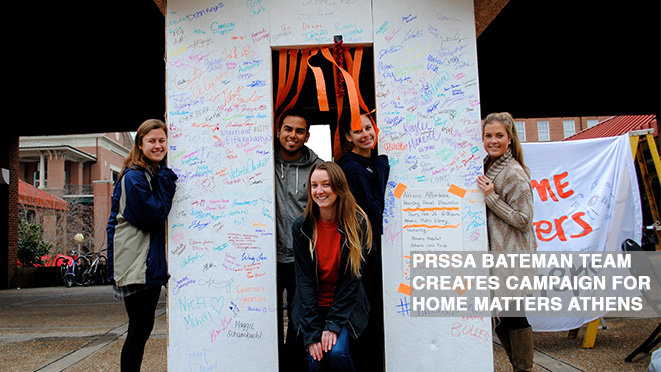 Amidst large academic buildings, a small white house with a large purpose took a temporary residence late February on The University of Georgia campus. The small house stood for one day to raise awareness of the affordable housing issue in Athens.

“We have a unique opportunity to spread awareness of an issue that plagues Athens,” said Bateman group member and social media specialist Cristian Delgado. “Athens-Clarke County is one of the poorest counties of its size in the nation. Our campaign will increase awareness of the poor living situations of hundreds of Athenians and will be a crucial stepping stone towards bettering the situation locally.”

Home Matters Athens has partnered with Athens Area Habitat for Humanity to deliver a campaign titled “Rebuilding The American Dream.” The campaign's goal is to increase awareness of issues in low-income housing, such as lack of safety, poor transportation, access to education and structural issues, such as poor insulation.

“Systematic poverty can be nipped in the bud if people have a stable place to go home to,” said Daniel Dávalos, senior mass-media-arts major at UGA. “I think students should care because when the most underprivileged people of our society benefit, then we all benefit. Everyone has intrinsic value.”

About Home Matters
Home Matters was launched in 2013 with the goal to spread awareness of the link between a safe, stable home and core societal issues such as health, education, safety, individual success and the economy. Home Matters strives to redefine the American Dream as a safe, nurturing environment with access to quality education, healthcare, public spaces and community services.

About the PRSSA Bateman Competition
The Bateman Competition is an annual event hosted by the Public Relations Student Society of America. PRSSA chooses a client at the beginning of each academic year then submits a project brief on what each team should accomplish. Universities throughout the country create team(s) of four to five students to create a campaign for that year's client. Top three teams receive grants to their local PRSSA chapter.