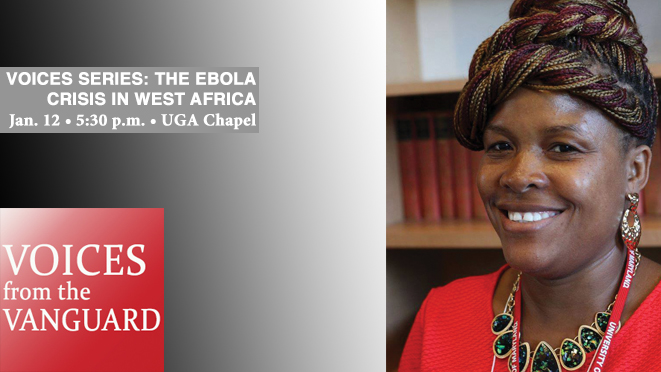 The Ebola outbreak in West Africa was the top health story of 2014, killing thousands of people, dominating news coverage and sending shockwaves through global travel and trade. Liberian journalist Wade C. L. Williams was on the front lines in Monrovia as an investigative journalist and head of the news desk at FrontPage Africa, one of West Africa’s largest digital news organizations.

Her first person account of what happened before, during and after Ebola captured the headlines opens the 2016 Global Diseases: Voices from the Vanguard lecture series on Jan. 12. This is the first of four events sponsored by the University of Georgia Grady College Health and Medical Journalism graduate program and the Center for Tropical and Emerging Global Diseases

Williams’ talk, “Mobilizing West African Communities to Defeat Ebola,” takes place at 5:30 p.m. in the UGA Chapel. The lecture is free and open to the public.

During the 2014 Ebola outbreak in Liberia, Williams was one of the most influential Liberian journalists who rigorously covered the epidemic. She interviewed the sick and dying and their families as the disease raged throughout the country. Wade’s first investigative work on the disease in 2014 and a subsequent op-ed in The New York Times led the government to change its approach to response to the disease.

“When Ebola hit, Wade Williams was already internationally known for her coverage of top health issues in Liberia and other West African countries,” said Patricia Thomas, co-organizer of the series and Knight Chair in Health and Medical Journalism at Grady College. “Since the crisis began, she’s also reported for the Associated Press, Bloomberg News and The Daily Beast and has won accolades for her work. We’re so pleased she’s coming to UGA.”

In December 2015, Williams received the Prestigious United Nations Correspondents Association 2015 Prize for Print. She is the recipient of the highest honor available for Liberian journalists, the Journalist of the Year given by the Press Union of Liberia.  Williams also won a prestigious Dag Hammarskjold fellowship, which enabled her and three other international journalists to spend three months in New York City covering the United Nations and the 2012 UN General Assembly. In that role, she broke stories with dramatic repercussions in Liberia.  Wade holds a Bachelor’s degree in Mass Communications from the United Methodist University in Monrovia.

This marks the tenth year for the global disease lecture.  Daniel G. Colley, professor of microbiology and director of CTEGD, shares the organizing with Thomas.

Other speakers this year include:

Feb. 16—Thomas W. Scott, Ph.D. a distinguished professor from the University of California, who will discuss viruses that are well known in other parts of the globe but on the verge of becoming big news in the U.S: chikungunya in the Southeastern U.S. and dengue in Hawaii.

March 15—Claire Panosian, MD, professor emeritus-recalled in Medicine/Infectious Diseases at the David Geffen School of Medicine at UCLA, who will present about global travel and the spread of disease, and how being on call for cases of exotic disease in one major airport is a window on the world’s infectious scourges.

April 12— Sarah J. Schlesinger, MD, associate professor of Clinical Investigation at The Rockefeller University, who will give the talk “Dendritic Cells, HIV Vaccines and the Nobel Prize: An amazing adventure.”

Each of the first three talks will be followed by a free public reception in the UGA Demosthenian Hall.