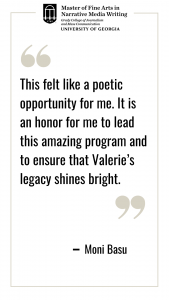 Moni Basu, an award-winning journalist and author, has been named the director of the Master in Fine Arts in Narrative Nonfiction program and the Charlayne Hunter-Gault Distinguished Writer in Residence at Grady College of Journalism and Mass Communication at the University of Georgia. She will begin her new role in January 2023.

Basu is leaving her role as the Michael and Linda Connelly Lecturer in Narrative Nonfiction at the University of Florida College of Journalism and Communications, a job she began in August 2018. She was named UF’s teacher of the year in her fourth semester there.

“We’re thrilled to have Moni join us full time,” said Jonathan Peters, head of the Department of Journalism at Grady College. “She’s a wonderful person and an award-winning teacher and writer, with bylines all over the world and deep experience covering issues related to trauma, race and identity. “Our students will be so fortunate to learn from her, and all of us in the Department of Journalism are excited for her to make her mark on the Narrative Media Writing program.”

“Moni brings continuity to the program. With her extensive experience in domestic and international reporting she also brings a new dimension to the mix,” said Jeff Springston, director of the MFA Narrative Media Writing program at Grady College. “As we seek to broaden our student base to become more international, she is the perfect person to lead that effort.”

The MFA Narrative Nonfiction program is a two-year, low-residency program designed to cultivate writers in storytelling. The program offers students an opportunity to develop skills that prepares them to be accomplished authors, editors, literary agents or other industry professionals. Students have published books and articles in national magazines. The MFA Narrative Nonfiction program is one of two tracks of study in the MFA Narrative Media Writing program. The other, in screenwriting, is directed by Nate Kohn.

Applications to the MFA Narrative Nonfiction program are due each year by May 1. Learn more on the program website.