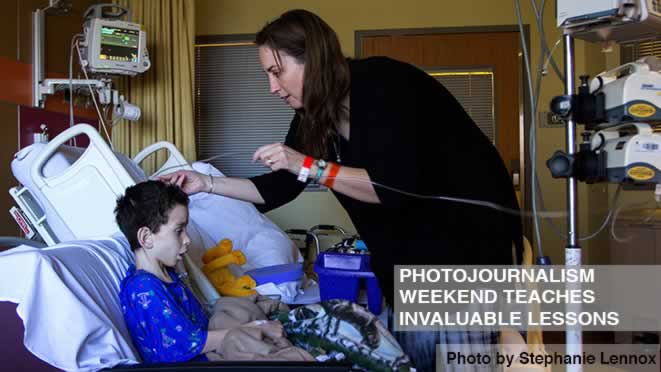 It may have been a different location each of the last ten years, but the goal is always the same: to put different voices in the students’ heads; to let them hear other ways of seeing.

That was the purpose when fifteen students from Mark Johnson’s Documentary Photojournalism class traveled out of town for a weekend in late February accompanied by Johnson and seven professional photojournalists.

In addition to a tenth anniversary, the Photojournalism Weekend Workshop is celebrating a first: a named sponsor of the event.  Grady alumnus Henry Woodall (ABJ ’75) and his wife, Lynda, now support the weekend by helping to fund the trip.  The Woodalls attended a reception to meet the students and professional photographers the night before the trip.

Henry Woodall (ABJ ’75) and his wife, Lynda, talk with Mark Johnson (left) and a student during the reception
recognizing the Woodall’s financial support of the photojournalism trip.
(Photo by S. Freeman)

This year’s trip was headquartered in Toccoa, Georgia, in Stephens County.  Each student was asked to research story ideas prior to the weekend and then spend roughly 50 hours taking pictures, gathering feedback from the professionals, reshooting, refining and constantly narrowing their stories (and squeezing in some food and sleep when they could.)  Recording audio was also required so the students could produce a multi-media project.

In addition to working on their primary stories, each student was required to photograph images for a Sense of Place representing what Stephens County looks like, and photos for the Face of Stephens County, or expressive portraits of the citizens who live there.  Each student literally takes thousands of pictures over the weekend, but turns in between 75 and 100 of their favorite images. The best pictures will be published in the Toccoa Record, a CNI newspaper. This is the sixth year CNI has played host to the workshop.

Grady College student Casey Lemmings talks through setting the flash on her camera
with Mike Haskey during the Woodall Weekend Workshop in Toccoa, Georgia, on Friday, February 27, 2015.
(Photo by Mark E. Johnson, www.mejphoto.com)

It was a high-pressure weekend and rarely did an original story idea turn out as planned as Stephanie Lennox, a fourth year journalism major, found out.

The main story idea Lennox researched was a visit a local bookstore, Ash-ling Booksellers, to document the customers who came and went during the day.  The story she ended with was an introspective piece about the owner of the bookstore, recently-widowed Jessica Handwork, and her struggles to run a business and care for her family, including a young son who had just had open-heart surgery.

Due to some medical complications Handwork’s son experienced, Lennox’s main subject was at the hospital with her son all weekend instead of in Stephens County.  Lennox went to the hospital in Atlanta, met with Handwork, and photographed the rest of the story in Stephens County, documenting the community’s support for the family, including helping them finish the construction of their home.

Despite the challenges, Lennox came away with one of the most important lessons a young photographer can learn: getting your subject to trust you.

“A majority of what photojournalism is when it comes to working with community is getting to know the person and when I went to the hospital, that is what I spent a majority of my time doing,” Lennox said.  “A majority of my time was getting to know her and getting her to trust me and allowing her to open up to me.  That’s a really huge lesson people have to learn.  You have to take the time and sometimes that takes 5 minutes and sometimes it takes an hour.”

“I’ve heard the term parachuting into stories a lot and how bad an idea that is, and it really hit home this weekend,” added Kicklighter.   “Being able to spend more time with these people kind of changed the way they interacted with me.  The first few hours I was there they would often freeze up when they saw me put my camera up to my eye, but by the end, they were completely natural.”

The interaction with the professionals is what makes the weekend so defining for many of the students.  For Kicklighter, it was having her editor come into the field with her and showing her how to work with different lenses and opening her up to different points of view that changed the way she thought about photography.

“I went in for the first day of editing and one of the editors I was working with basically hated the direction I was going with my story,” Kicklighter said. “She thought it was too broad a concept.   So, then I had to shift my entire way of thinking and realize I had to get even more narrow and just pick one of these amazing people that I had just met. I feel like I have come out of that experience as a completely new photographer.”

In addition to working with professional photographers to hear their points of view, the other big advantage of the weekend was providing a work experience that the students just couldn’t get in the classroom.

“You are out in the real world,” Lennox said. “It’s not just a project, it’s an assignment.  We are treated like we work in a publication and we are edited like we are working in a publication. Just taking it half way isn’t accepted. We are thrown into it and have to learn how to deal with it.  It can be a little traumatic at first, but it teaches you way more than a class could.”