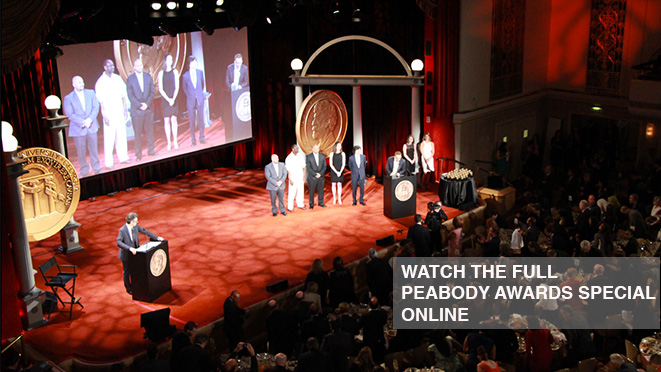 Pivot TV, a cable and online network, televised a condensed, impressionistic version of our May 19 Peabody Awards ceremony on Sunday, June 1, at 9 p.m.

The Peabodys have been on TV before, broadcast by PBS and A&E respectively, most recently in 2003. But in those instances, what viewers saw on their home screens was the full event, a parade of previously announced winners making acceptance speeches.

Anybody who's ever attended a Peabody ceremony can tell you that there's a crackling excitement, a sort of breeder-reactor effect, in the Waldorf-Astoria's Grand Ballroom as recipients, who range from prime-time stars to local-station investigative reporters to international documentary makers, fully realize the magnitude of the honor and the heady company they're in. They radiate pride and camaraderie.

But that's if you're in the room. To see all that on television, alas, is a little like playing the CD you bought at a nightclub and realizing that the sensational band you danced to last night is not quite the greatest music-machine since the Beatles.

Pivot hired Den of Thieves, a Los Angeles-based outfit that produces specials such as the Billboard Music Awards and the MTV Movie Awards, to distill this year's three-hour Peabody ceremony into a pithy, hour-long special that's intended to convey the feel of the event as well as representative particulars.

In an effort to make the event more TV-friendly, Roe studied this year's list of 46 Peabody recipients, looking for ways to divvy them up thematically. “What do they represent?” he asked. “Is this a story about race? Is this a story about women's rights? What came to light is that there are these themes that run through all the awards.”

For more details about the breakdown of the TV special, visit www.peabodyawards.com. To learn where you can see The 73rd Peabody Awards on Pivot, go to http://find.pivot.tv/.