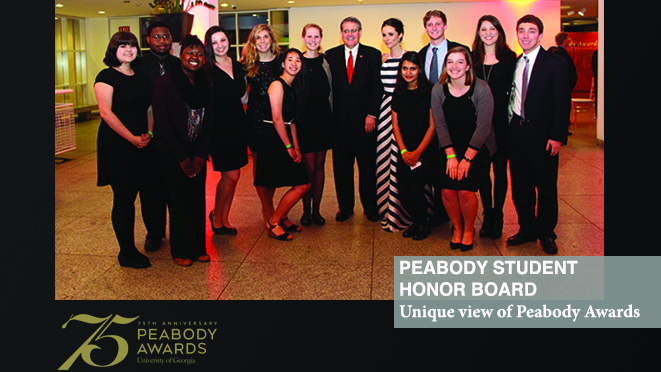 It’s not every campus organization that assigns its members to study online digital media and then provides a national spotlight to showcase their selections…let alone attend an awards ceremony in New York with top journalists and celebrities. Students on the Peabody Student Honor Board have those opportunities and more through their work as Fellows for the Peabody Awards and their newest assignment: the selection of the Peabody Facebook Futures of Media winners.

“From my own personal experience, it's the coolest thing I've done, by far, at UGA,” said second-year Peabody SHB member Alex Estroff, a journalism major from Marietta, Georgia.

The Peabody SHB is tasked with roles for the prestigious award recognizing excellence in electronic media and stories that matter. Because the University of Georgia’s Grady College is home of the Peabody Awards, students from across campus are invited to apply to be on the SHB. Students help with Peabody events, increase awareness of the Peabody Awards on campus, serve as production assistants during the awards ceremony on May 21 and select the Peabody Facebook Futures of Media winners.

The Futures of Media award is a brand extension of the 75-year-old Peabody Awards and this is the first year they will be presented. The SHB has spent months evaluating digital media with strong narratives: websites, digital journalism, podcasts, webisodes, mobile apps and computer games. The goal was to identify five winners that will be recognized at a special lunch presentation on May 20, the day before the Peabody Awards.

“In the spirit of stories that matter, we are also focusing on futures of media and how stories are using innovative ways and innovative technologies to tell their stories,” said Tien-Tien Cheng, vice-chair of the Peabody SHB and a Grady student specializing in mass media arts. “We are asking ‘how does the medium allow this story to be told?’ We looked at podcasts, virtual reality, interactive elements…any digital platform where you can experience the story on a deeper level.”

The members of the SHB were not new to advocating for the entries they thought would best represent this award. To earn a spot on the board, each member had to select an example of what they thought should win a Futures of Media award, write a one- to two-page paper about why it deserved to win and present an oral argument. Once on the board, they evaluated scores of other entries and debated with their colleagues to decide on five winners.

“These students had to discuss and engage each other over several months,” said Lynh Tran, program coordinator for Peabody and the main liaison with the SHB along with Peabody Director Jeffrey P. Jones. “They had to walk the group through each piece and make their case for an entry.”

Estroff said the process was a lot of work, but it was not without its benefits.

“It takes a lot of back and forth,” Estroff said. “We had to deliberate a lot and, at times, it was kind of stressful because we would have to come back to the Peabody office and be there for hours on end. But, in the end, it was very rewarding, this feeling of finding these really special pieces of media.”

For Travis Brown, a first-year SHB member specializing in mass media arts, the process has been a good complement for his love of video games.

“I’ve appreciated the fact that students could get their voices out there in terms of the Futures of Media Award, because as future media consumers it’s really important for us to show what we think the future of media is,” Brown said. “Especially to be able to work and push for a video game to be one of the Futures of Media winners, it really shows what media will become in the future.”

With all this work comes the enviable experience of getting to attend some special events. In addition to helping at the luncheon where the Futures of Media awards will be presented, the SHB members assist with events such as the Peabody Smithgall lecture, which featured Henry Louis Gates, Jr. last spring, the kick off celebration for Peabody’s 75th anniversary in Atlanta and, of course, the Peabody Awards ceremony. Peabody SHB members serve as production assistants at the ceremony and help usher guests backstage, present the awards to them and escort the winners to interviews and photo sessions once they have received their awards.

“One of the benefits of being part of the board is getting to go to New York and experience the awards show. Not a lot of people can say they've experienced an awards show,” said Cheng, a native of Athens, Georgia.

For Estroff, the best part of the ceremony last year was the After Party.

“We were actually able to see all of these extraordinary people on a personal level,” Estroff recalled. “We spoke with Sarah Koenig (executive producer of the podcast ‘Serial’) for 10 minutes. I took a picture with Amy Schumer. I shook hands with John Oliver, and he's, like, one of my idols.”

Perhaps the biggest benefit for the students is the appreciation for electronic media that might not otherwise be viewed.

Estroff tries to watch and listen to as many of the winning entries as he can between the time they are announced and the ceremony.

“’The Knick’ (a Peabody winner from last year) is my favorite show now and I never would have known about it if it weren't for the Peabody Awards,” said Estroff. “They do an extraordinary job of recognizing excellence, and we, as the Student Honor Board, try to emulate that.”

He also completed a CURO research assistantship with Jones last summer where he and follow Peabody SHB member Kara Wexler worked in the Peabody Awards Collection at the UGA Special Collections Libraries all summer.

“It's just one more thing I'm thankful for that the Awards have given me,” Estroff said of his experience.

Cheng says she has a better appreciation for creating experiences for audiences to enjoy, and even though she doesn’t know what she wants to do for a career, her involvement with the Peabody Awards has shown her how well-told stories can move an audience.

“What Peabody has taught me is to be very intentional in how you create stories,” said Cheng. “A lot of stuff you see is not as intentional as you want it to be. With the Peabodys, you can see that you can create successful shows. You can create successful stories or content that has a message and meaning and that is able to reach different audiences and say something important.

“A lot of these stories are able to do that,” Cheng continued. “They create experiences that are, like, ‘wow, I want other people to watch it.’ These shows are really good at making people think about where you are in life and where society is in life.”