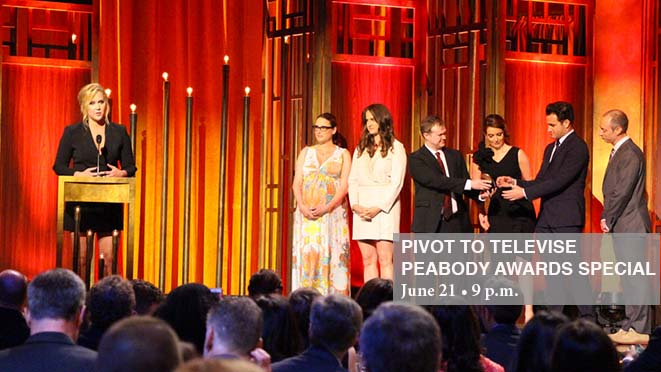 This article originally appeared on the Peabody Awards website.

For the second consecutive summer, the cable network Pivot will televise a prime-time special that distills the essence of the University of Georgia’s annual Peabody Awards ceremony, once again blending footage of the presentation with choice excerpts from winning shows and interviews with the men and women who made them Stories That Matter.

But Pivot’s show on Sunday, June 21, starting at 9 p.m. EDT, will be noticeably different from last year’s. The 74th annual ceremony, staged May 31 in New York at the elegant event-temple Cipriani Wall Street, was the first nighttime gala in Peabody history, complete with red carpet and in some cases celebrity presenters, including Tina Fey and Charlie Rose. Perhaps even more important from a home-viewer’s perspective, it’s the first Peabody ceremony conceived and produced with television in mind. The set is streamlined and quite dazzling, the lighting more like what viewers would associate with a Tony or Emmy telecast.

Fred Armisen, a Peabody winner for his work on Saturday Night Live and again for his IFC comedy Portlandia, contributes a hint of mischief to his hosting chores, the like of which hasn’t been seen since Jon Stewart did the honors in 2006. And given what Pivot had to work with, expect noble, heartfelt moments as well as some laughs. This is, after all, the ceremony at which Amy Schumer, star of the eponymously titled Inside Amy Schumer, laid a Madonna-style lip lock on Fey that was photographically noted everywhere from the TIME magazine to Access Hollywood.

At this writing, the line-up of Pivot’s Peabody special has not been finalized. But, given that this year’s 40 winners ranged from “Last Week Tonight with John Oliver” and the eye-popping science series “COSMOS: A SpaceTime Odyssey” to “CNN’s Coverage of the Kidnapped Nigerian School Girl”s and the Netflix documentary “Virunga,” this year’s 90-minute Peabody potpourri should be a blast to watch even as it suggests great programs to stream or rent.

For a complete, annotated list of what won this year, see this link to the 74th Annual Peabody Award Winners full citations.

For more about Pivot and the show, please visit takepart.com/pivot/peabody-awards.