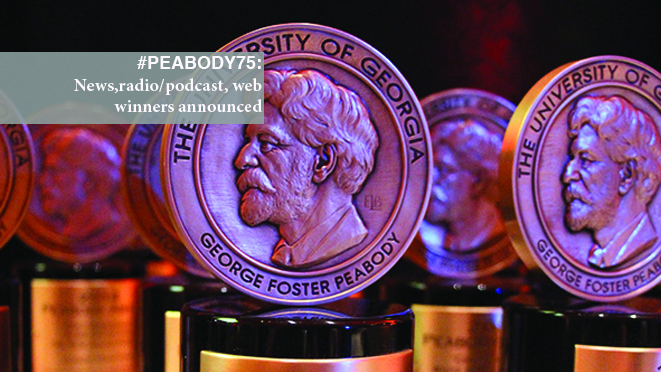 The Peabody Awards today announced the first group of winners in The Peabody 30, honoring programming in news, radio/podcast, web and public service. The honorees range from a local TV station’s reporting on smartphones’ fatal 911 blindspots to a classical music podcast and a website devoted to educating social media users about privacy concerns. The Peabody Awards are based at the University of Georgia’s Grady College of Journalism and Mass Communication.

This year marks the inaugural winners of The Peabody 30. The remaining slots will be unveiled over the next week.

The News, Radio/Podcast, Web, and Public Service winners in this year’s Peabody 30 are as follows (network/platform in parentheses):

WTAE reporter Paul Van Osdol provided a four-alarm public service when he doggedly investigated the wildly varying response times of Pennsylvania’s volunteer fire departments and found a chronically inefficient system that hadn’t changed substantially since the days of horse-drawn trucks and bucket brigades. His sleuthing prompted legislative hearings and the passage of bills aimed at quickening response and saving lives, as well as public questioning of the dependence on volunteers instead of professional municipal services.

Reporting on the men, women and children fleeing Syria and other Middle Eastern war zones, NewsHour’s Desperate Journey series captured the life and breadth of the worst displaced person crisis since World War II: the initial, inspirational hospitality of European hosts, the eventual resistance as the waves of humanity became overwhelming, and the hopes and horrors experienced by the refugees themselves.

Visiting Do Not Track may leave you feeling like a moth in a spider web. Focused on internet economics and privacy issues, the website’s personalized episodes provide a wealth of provocative information about the science of cookies, tracking and who is profiting from your social media participation. The user is shocked at the breadth of information he or she regularly gives up in the course of routine and mundane activities across digital and mobile platforms.

The BBC reminded us why it’s the gold standard of electronic-media news with its wide-ranging, richly detailed, deeply humane television and radio reporting about the reality and ramifications of the surge of millions of Middle Eastern refugees into Europe.

Fascinating, intelligent, enlightening podcasts devoted to the work of current classical composers. The show integrates music with thoughtful conversation about it without distracting from either.

Inspired by a single 911 call for help that failed fatally, WXIA reporter Brendan Keefe launched an ambitious, enterprising multimedia probe that revealed government oversights and technical shortcomings in supposedly smart iPhones and in telecommunications infrastructure that were causing needless deaths across the country.

Reporting from Congo, Tanzania, and Kenya, “Real Sports” documented the billion-dollar, criminal enterprise that is the ivory trade, the sickening slaughter of elephants that fuels it, the devotion and bravery of rangers trying to protect them, and the delusion of trophy hunters who insist the money they bring to Africa somehow slows the decimation.

Horrifying and infuriating although, alas, not surprising, this unforgettable report documented the U.S. Army’s testing of an abominable chemical weapon on some 60,000 of our own World War II soldiers, most of whom were black.

In a collection of powerful, personal stories about the nexus of education and race, “This American Life” weighs the statistical benefits of desegregation against the pressure, even humiliation, that many minority students experience. The two-part broadcast is a bold, honest examination of what can happen when social engineering meets reality.

Launching its probe six months before a Chicago police officer was charged with first-degree murder in the shooting of 17-year-old LaQuan McDonald, WMAQ’s relentless, unrivaled reporting brought to light a host of police procedural infractions, official disinformation and outright lies, and contributed to a police department shake-up.