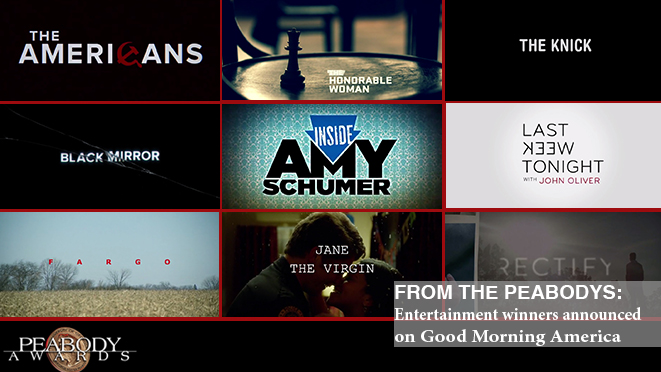 From an honorable woman entangled in Israeli-Palestinian conflicts to a virginal Jane; from a faux-American/spy to an irrepressible North Dakota cop ̶ strong, multi-dimensional women stand out among the 74th Peabody Awards' entertainment winners, affirming the continuing expansion of significant roles for women on television.

The list of entertainment programs chosen for the 74th annual Peabody Awards at the University of Georgia includes “The Honorable Woman,” a richly textured BBC drama that illuminates byzantine complexities in Middle East relations and boasts a towering lead performance by Maggie Gyllenhaal; Comedy Central’s “Inside Amy Schumer,” a sharp-witted blend of sketches and interviews that’s distinctly female yet gender-inclusive; and “Jane the Virgin,” a visually and narratively innovative CW series that employs the soap-operatic, telenovela form to tell a serialized tale, by turns whimsical and poignant, about a household of three generations of Latina women.

The Peabody Board of Judges also chose FX’s “The Americans,” an ingenious melodrama about Reagan-era Soviet spies—married and the parents of budding American dreamers—who make viewers care about them and their increasingly conflicted loyalties, and “Fargo,” which pits an upstanding, undeniable female cop against an almost supernatural villain. The FX series maintains the darkly comic tone of the Oscar-winning theatrical film while unspooling a distinctly different, more complex story.

Other entertainment winners were “The Knick,” Cinemax’s fascinating historical drama about pioneering surgeons at an early 20th-century New York hospital; HBO’s “Last Week Tonight with John Oliver,” which revisits the previous week’s news with a satiric eye and an investigative reporter’s curiosity; Sundance TV’s “Rectify,” an understated, powerful drama about a man struggling to reconnect to his Georgia community after 20 years in prison; and “Black Mirror,” a dramatic anthology from Britain’s Channel 4 that explores unsettling moral and ethical questions that bring to mind the work of Rod Serling and Roald Dahl.

The Peabody Awards’ news and radio winners will be announced on April 20 on the Peabody website, www.peabodyawards.com, as will recipients in the areas of documentary, public service, education, and children’s programming on April 23.

Individual and institutional Peabodys, previously announced, are respectively going to Sir David Attenborough, the renowned British nature documentarians, and “Afropop Worldwide,” the long-running public-radio series devoted to the cultural music of Africa and the long, ongoing creative dialogue it inspires in musicians and the music business worldwide.

These and other winners of the 74th annual awards will be presented with their award on Sunday, May 31, at the first-ever nighttime, red-carpet Peabody ceremony. Fred Armisen, a Peabody winner for his work on “Saturday Night Live” and his series “Portlandia,” is set to host the gala at Cipriani Wall Street in New York. Pivot, Participant Media’s TV network, will premiere “The 74th Annual Peabody Awards on Pivot,” a 90-minute special on Sunday, June 21 at 9pm ET/8pm CT.

In this ingenious, addictive cliffhanger, Reagan-era Soviet spies – married with children and a seemingly endless supply of wigs — operate out of a lovely 3BR home in a suburb of Washington, D.C.  Between their nail-biter missions (and sometimes in the midst of them), the series contemplates duty, honor, parental responsibility, fidelity, both nationalistic and marital, and what it means to be an American.

This cinematically arresting, brilliantly written series from England is an anthology of dark-side tales – dark as a black hole. If its narrative shocks don’t wreck your sleep pattern, its moral conundrums will.

A visually rich, densely-plotted thriller set against the backdrop of the Israeli-Palestine conflict, it suggests complexities and age-old vendettas that often escape even the best documentaries, to say nothing of the evening news.

Immaculately conceived, it’s a smart, self-aware telenovela that knows when and how to wink at itself. Its Latina lead, Gina Rodriguez, is incandescent.

Graphic, gripping, unapologetically grisly when it has to be, this lavish historical drama masterfully dissects surgical experimentation, doctors’ egos, race relations and socials mores in the New York City of 100 years ago.  It gives new meaning to the term “operating theater.”

A most worthy addition to the news-as-comedy genre, “Last Week Tonight” doesn’t just satirize the previous week’s news, it engages in fresh, feisty investigative reports that “real” news programs would do well to emulate.

Rectify (Sundance TV)
Gran Via Productions, Zip Works
A powerful, subtle dramatic series about a death-row inmate freed after nearly two decades thanks to new DNA evidence, it ponders whether what’s been lost can ever be repaid, not just to him but to everyone he and his alleged crimes touched.