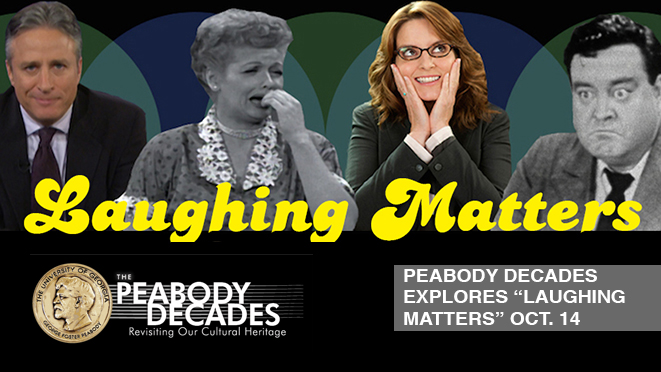 The George Foster Peabody Awards and the Peabody Collection at the University of Georgia will launch the second season of “The Peabody Decades,” a series of documentaries drawing on the Peabody archives, on October 14 at 7 p.m. at the Richard B. Russell Building Special Collections Libraries.

Each “Decades” program is free and open to the public, and each will highlight a different television genre or theme.

The season opener, “Laughing Matters,” will focus on TV comedy, showcasing the comedy-variety shows that dominated early television, the situation comedies that remain a prime-time staple, and the comedy-oriented talk shows that began with hosts such as Steve Allen in the early 1950s and continue to thrive today with the likes of David Letterman at the desk. For a commentary about this program, please see the Peabody Awards blog.

The clips and photos will cover almost 70 years of comedy shows and stars, among them Ed Sullivan's “Toast of the Town,” Sid Caesar's “Your Show of Shows,” Jackie Gleason's “The Honeymooners,” Wally Cox's “Mister Peepers,” “Father Knows Best,” “The Carol Burnett Show,” “All in the Family,” “Roseanne,” “Murphy Brown,” “The Cosby Show,” “Late Night with David Letterman,” “Key & Peele” and “The Colbert Report.”

Future programs include “Watching the Detectives,” on Nov. 11, which will explore the history of crime, cops and mystery on television. Programs to be excerpted include the Peabody-winning radio anthology “Suspense” (1946), “Naked City,” “The Lawless Years,” “Columbo,” “Police Story,” “The Rockford Files,” “Hill Street Blues,” “Homicide: Life on the Street,” “Law & Order,” “Twin Peaks,” “Prime Suspect,” “The Sopranos,” “The Wire,” “Sherlock Holmes,” “Dexter” and “Breaking Bad.”

The “Decades” series will resume in March with a program devoted to animation on television. The excerpted programs from the Peabody archive will include “Time for Beany,” “The Bullwinkle Show,” “The Flintstones,” “The Smurfs,” “Dora the Explorer,” “Animaniacs,” “The Boondocks” and “The Simpsons.”

The April edition of “Decades” will mark the 150th anniversary of the end of the American Civil War. It will feature portions of Ken Burns' landmark, Peabody-winning series and other relevant documentaries and dramas from the archive, including “The Andersonville Trial” and “Gore Vidal's Lincoln.” Full details will be announced after the first of the year.

“Our series uses the Peabody Awards Collection, the largest broadcasting archives in the Southeast, to tell stories about radio, television and history,” said Mary L. Miller, an archivist at UGA. “The Peabody Collection is like a giant time capsule. The archive houses not just Peabody Award winners from more than 70 years, but just about everything that has ever been entered in the competition.”

The Peabody Awards, the oldest in broadcasting, are considered among the most prestigious and selective prizes in electronic media. The awards recognize excellence and meritorious work by radio and television stations, networks, webcasters, producing organizations and individuals. The 16-member Peabody Board is a distinguished panel of television critics, industry practitioners and experts in culture and the arts. Selection is made by the board following review by special screening committees of UGA faculty, students, and staff. For more information regarding the Peabody Awards program, see www.peabodyawards.com.

The Walter J. Brown Media Archives and Peabody Awards Collection is one of the largest broadcasting archives in the country, with over 250,000 titles preserved in film, audio and videotape, and other recording formats. The only public archive in Georgia devoted solely to the preservation of audiovisual materials, the Brown Media Archives holds programs dating from the 1920s to the present day. For more information, see http://www.libs.uga.edu/media/ or visit the exhibit space in UGA's Richard B. Russell Special Building Collections Libraries.