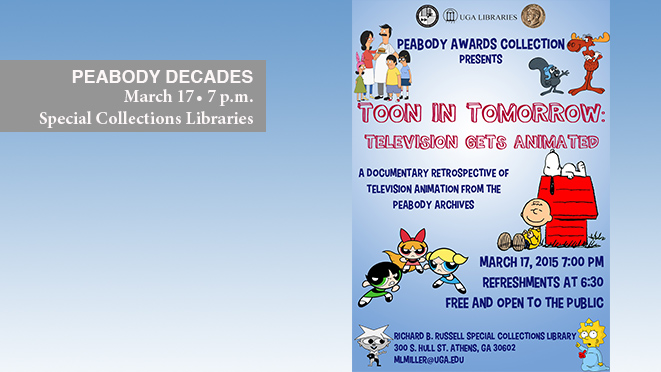 There was a recurring gag in the old Rocky and Bullwinkle TV series that you may recall. Everybody's favorite screw-loose moose would appear in magician's costume and say, “Hey, Rock, watch me pull a rabbit out of my hat.” Whereupon he would reach in and a bear or a lion — anything but bunny — would ferociously present itself. “Wrong hat,” Bullwinkle would say.

We've got no magic hat here at the Peabody Awards, but we have conjured a lively, whimsical documentary out of our archives: a history of animation on television that spans more than 60 years.

Toon in Tomorrow: Television Gets Animated will debut at 7 p.m. Tuesday, March 17, in the auditorium of the Russell Special Collections Library on the University of Georgia campus at 300 Hull Street. As with our previous Peabody Decades documentaries about TV comedy and crime shows, respectively, it will be admission free and open to the general public as well as UGA students, faculty and staff.

Animation and TV go way back. Way, way back.

Cartoons were sometimes used for transmission testing of television in the 1930s — before the Peabodys were conceived to honor ambitious radio programming, before TV sets were even marketed to the public. And once television began its mass-audience ascendency in the late-1940s, repurposed theatrical cartoons — Bosko, Felix the Cat, Bugs Bunny, Popeye — quickly became a staple of daytime and Saturday morning programs aimed at children.

There was very little original cartooning in those early, shoestring budget days. Viewers were more likely to see fresh animation in a prime-time comedy's opening titles or a commercial featuring dancing cigarettes or beer bottles.

The funds available were so skimpy that Bob Clamplett, the Looney Tunes veteran who created Beany and Cecil, originally did the show with hand puppets. That's just one of the rarities you'll be seeing a bit of in the 90-minute documentary created by Peabody Awards staff with special curatorial assistance from animation buffs Mandy Mastrovita, a UGA digital projects librarian, and Devlin Thompson, manager of Bizarro-Wuxtry Comics & Stuff.

The clips we've picked for inclusion cover a large range of shows, from Winky Dink and You (1953), which has been called the first interactive TV series, to current series such as Bob's Burgers.

As Bugs Bunny and his pals used to sing, “Oh, what heights we'll hit. On with the show, this is it.”

Looking ahead, our April 21 Decades documentary, Blue & Grey, will mark the 150th anniversary of the end of the American Civil War. It will combine archival clips of documentaries such as Ken Burn's The Civil War with scenes from TV-movies (Gore Vidal's Lincoln) and plays (The Andersonville Trial) dating back to the 1950s to illuminate the war and how our collective understanding of it has been shaped by television.