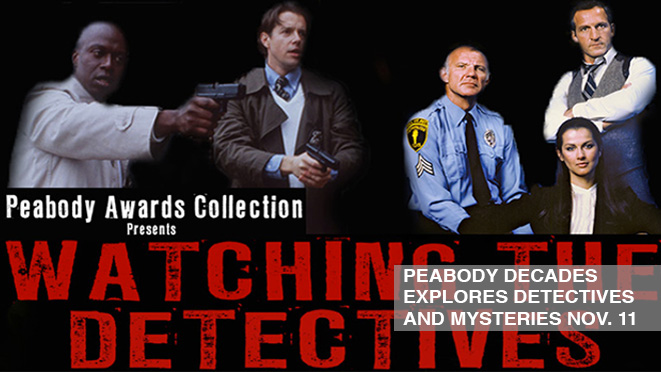 In the realm of broadcasting, crime has always paid.

Radio in the 1940s was roiling with private eye, cop and mystery show, among them I Love a Mystery, Crime Club, Sam Spade, Gang Busters, Bulldog Drummond, The Shadow and Boston Blackie.

And except for a stretch of the 1950s when cowpokes and frontier sheriffs were America's gunmen of choice, crime has never stopped being a major staple of prime time entertainment.

Watching the Detectives, the second Peabody Decades documentary of this season, will use clips from the Peabody archives to trace the evolution of crime and mystery shows over the course of more than six decades.

It's a revealing survey. It's not that the names have been changed to protect the innocent, as Sgt. Joe Friday liked to say on Dragnet, it's that innocence itself has taken a bludgeoning. The crime-stoppers nowadays are often as scary as the crooks.

Because the Peabody Awards were conceived to encourage broadcasters to do more public service and high-minded shows, Peabody judges in the award's early years didn't hold the crime genre in high regard. Suspense, a classy radio anthology that attracted big-name guest stars, was honored in 1946, but the genre went ignored for three decades until Hill Street Blues was undeniable in 1981. Since then, crime related shows have been chosen regularly. NYPD Blue, The Sopranos and Breaking Bad are just a few singled out for excellence.

Watching the Detectives is scheduled for 7 p.m. on Tuesday, Nov. 11, at the auditorium of the Russell Special Collections Library, 300 Hull Street, Athens.

Like all previous Decades programs, it's free and open to the general public as well as University of Georgia students, faculty and staff.

Unlike most Decades programs, it won't entail live-in-the-auditorium host presiding over a slide show of clips. To make the experience more seamless and TV-like for our audiences, the Peabody staff is attempting documentary videos, with music, overdubbed narration, the works.

And stick around afterwards to chat about how what we consider “realistic” has changed from the time of Dragnet and Naked City to the era of The Wire and Breaking Bad.

Looking ahead, the Decades series will resume in March with a program devoted to animation on television. The excerpted programs from the Peabody archive will include Time for Beany, The Bullwinkle Show, The Flintstones, The Smurfs, Dora the Explorer, The Boondocks, The Simpsons and South Park.

The April Decades will mark the 150th anniversary of the end of the American Civil War. It will feature portions of Ken Burns' landmark, Peabody-winning series and other relevant documentaries and dramas from the archive, including The Andersonville Trial, Gore Vidal's Lincoln, 100th anniversary commemorative programs from 1964 and a 1959 documentary based on the war photos of Matthew Brady.

Full details will be announced after the first of the year.