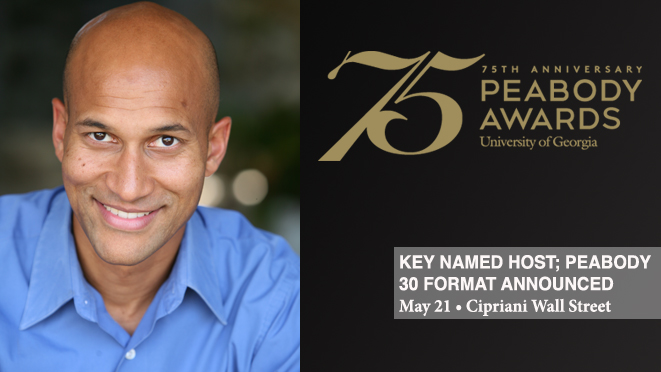 The 75th Peabody Awards ceremony gala will be held on the evening of Saturday, May 21 at Cipriani Wall Street in New York and be hosted by Peabody Award recipient Keegan-Michael Key (Key & Peele, Fargo).

The Peabody Awards, based at the University of Georgia, will select finalists for the first time in its history, to be announced April 12. From the 60 Peabody Finalists, a group of winners—The Peabody 30—will ultimately by chosen. The Peabody 30 will be revealed in a succession of announcements by category, beginning April 19.

“There are now more than 400 scripted prime-time television shows, new locations for documentary television, a flood of podcasts, and a wealth of quality digital storytelling,” Peabody Awards Director Jeffrey P. Jones said. “Peabody has to reflect that change in order to continue to award the best of the best, while also recognizing and highlighting this expanded field of quality media production.”

Once again, the gala will be televised in a 90-minute special, “The 75th Anniversary Peabody Awards,” airing on Pivot, Monday, June 6 (8 pm ET/PT). Pivot is repeating the success of last year’s telecast by bringing back the production talents of Den of Thieves.

As part of the week leading up to the Peabody Awards gala, several New York events will also be held to commemorate the 75th anniversary. On May 18, the cast and showrunner of one of this year’s winners will be present for a screening and discussion, sponsored by Pivot, which  will take place at the New York Institute of Technology auditorium. On May 19, Peabody will look back across the career of Sheila Nevins and a selection of the 49 Peabody winners that the HBO documentary unit has won over the last 35 years. That event will take place in the HBO screening room at HBO headquarters.

“It is an immense honor for the University of Georgia to help usher in the 75th installment of the Peabody Awards,” said Jones. “As media have evolved during these many decades, so have the awards. Great stories and story-telling now takes place on platforms that provide a level of audience engagement that no one could have imagined only a short time ago. While once again the main event will be the awards ceremony, we are pleased to expand our activities on this special occasion to include new events which also honor achievement in electronic media.”

Key, an award-winning actor, writer and creator, has become one of the most creative and in-demand faces in Hollywood for both comedy and drama. He is the co-creator and co-star of Comedy Central’s “Key & Peele with Jordan Peele,” a 2014 Peabody Award-winning show that has become a TV and viral sensation. On television he has also appeared in USA’s “Playing House,” Adult Swim’s “Children’s Hospital” and NBC’s “Parks & Recreation,” and was a series regular on FOX’s “MADtv” for six seasons and CBS’s “Gary Unmarried.”

In film, Key recently completed production on Peter Atencio’s “Keanu” (a Warner Bros. release set for April 29). The film follows friends who hatch a plot to retrieve a stolen cat by posing as drug dealers for a street gang. He also recently completed production on Mike Birbiglia’s comedy “Don’t Think Twice” opposite Gillian Jacobs; is currently in production on John Hamburg’s “Why Him?” (with James Franco, Bryan Cranston, Zoey Deutch and Megan Mullally) which opens this November; and counts “Vacation,” “Pitch Perfect 2,” “Horrible Bosses 2” and “Let’s Be Cops” among his most recent film credits.

Key was named among Time magazine’s “Most Influential People of 2014” and Entertainment Weekly’s “Entertainers of the Year of 2012.” A founder of The Planet Ant Theatre in Hamtramck, Michigan, he’s also a veteran of Detroit and Chicago’s The Second City Theater.

Before there were Emmys, before there were DuPont-Columbia’s, Golden Globes, Silver Gavels, People’s Choice or any other award for electronic media programming, there was Peabody.

Peabody was the first, it remains the most prestigious, and this spring the University of Georgia’s coveted prize marks its 75th year—three-quarters of a century of celebrating stories that matter in a media universe that has expanded dramatically since those early radio days.

Peabody was born of radio’s pursuit of respect. Leaders of the National Association of Broadcasters in 1938 authorized Lambdin Kay, general manager of Atlanta’s WSB-AM, to develop a prize they hoped would have the cache that the Pulitzer had in the print world. Kay’s vision was realized at the University of Georgia in 1940.

In its early years, the boards of jurors overwhelmingly honored news and information programming and public service campaigns. Awards to entertainment fare, even of the highbrow variety such as live drama, were fairly rare. That changed in the 1970s when “popular culture” underwent scholarly and critical reassessments. TV series such as “M*A*S*H” and “All in the Family” suggested new possibilities for social commentary and real-world relevance in established entertainment formats.

By the turn of the 21st century, it was common practice for Peabody boards to honor a gritty crime series such as “The Wire” or a cheeky satire such as “South Park,” along with war reporting from deep inside Syria and an innovative production of “Macbeth.”

In 2014, a first ever Peabody Advisory Board was recruited. Comprised of 25 top executives in news and entertainment, the Advisory Board is charged with boosting awareness of the award and helping to build a Peabody endowment that will be used to preserve and make more accessible the Peabody Awards Collection.

Every submission becomes part of the Peabody Archive located on the University of Georgia’s campus. It is now the nation’s third largest archive of radio, TV and web programming. The more than 90,000 items—16 mm films, kinescopes, tapes, cassettes, DVDs and hard drives ̶ are housed in a cavernous, climate-controlled vault underneath the Richard B. Russell Building Special Collections Libraries.

Peabody after 75 years is, more than ever, the gold standard of awards for electronic media, a prize that encourages excellence as well as rewarding it. As multiple-winner Walter Cronkite once said, “You count your Emmys, you cherish your Peabodys.”

Peabody is an organization dedicated to invigorating people through the power of stories. Founded in 1940, Peabody honors and extends conversation around stories that matter in radio, television, and digital media through symposiums, screenings, podcasts and an annual awards ceremony considered to be among the most prestigious in the entertainment industry. Peabody gives awards for news, entertainment, documentaries, children’s programming, education, interactive programming, and public service, in turn, encouraging the media industries to reach for and achieve the highest standards. Peabody is administered through the Grady College of Journalism and Mass Communications at the University of Georgia. For more information, visit peabodyawards.com or follow @PeabodyAwards on Twitter.