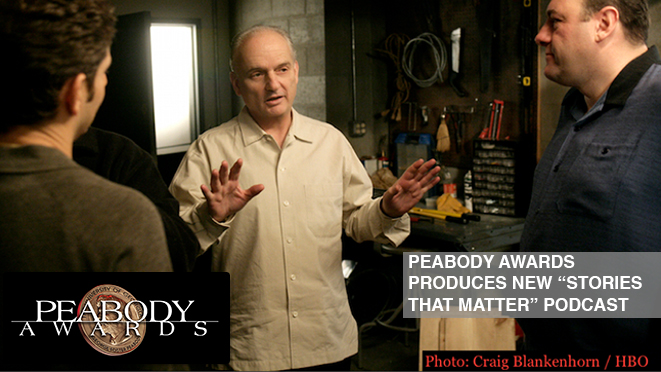 The premiere, which will be rebroadcast Monday, Dec. 1, at 3 p.m., is a wide-ranging interview with David Chase. Best known for creating and guiding the Peabody-winning cable series “The Sopranos,” Chase has a long resume that includes writing and/or producing for “I'll Fly Away,” “The Rockford Files,” “Northern Exposure.”

In a recorded conversation punctuated with excerpts from Chase's shows, interviewer Matt Shedd gets him to talk candidly about his influences (which range from Martin Scorsese to the Three Stooges), his unhappiness working in conventional TV drama and what it was like to win a Peabody for a show about a New Jersey mob boss with mid-life issues.

“What I said on stage (at the ceremony) didn't begin to express what I was feeling because it went beyond surprise and mystification,” Chase tells Shedd. “I was, you know, okay, we're going to get the Peabody Award and I'm glad. Then they start to hand out the awards and there are stories about children injured in war, land mines. There's stories about national policy concerning education.

“I still don't quite understand it, but I guess I can intuit what was going on. People finally saw something on television in which they saw something about human life that seemed to be related to life as they knew it. I hope that's what it was. That it felt real.”

Each installment of “Stories That Matter” will shine a spotlight on media from the vast Peabody Awards Collection housed in the UGA Libraries, the third largest audio-visual collection in the United States. Episodes will feature interviews with past Peabody Award winners, excerpts from their bodies of work and commentary from media scholars and critics.

Monthly installments in the works include annotated conversations with Larry Wilmore, a Peabody winner for “The Bernie Mac Show” who has been tapped by Comedy Central to succeed Stephen Colbert in January, and documentarian Alex Gibney, a two-time Peabody winner whose James Brown biography premiered on HBO in November.

Abbreviated versions of the “Stories” installments will air once a month during NPR's “Morning Edition” on WUGA-FM. Associated full-length interviews will be released through the Peabody Awards podcast, now available through iTunes and on PeabodyAwards.com.