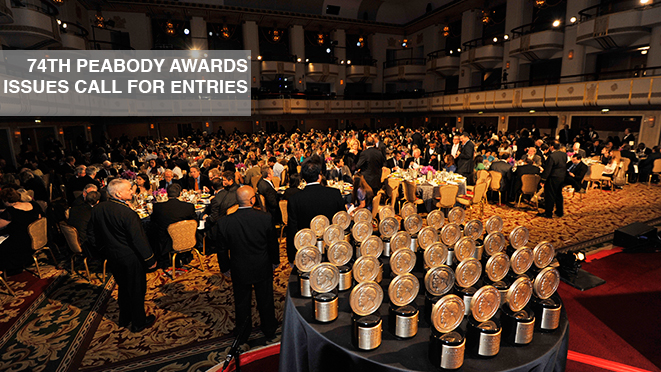 This is an article originally written for the National Association of Television Program Executives and reprinted with permission by peabodyawards.com.

The few, the proud, the Peabodys. …

If the United States Marine Corps didn't already have a very similar recruiting slogan copyrighted, it would be ideal for the George Foster Peabody Awards. No other honor in electronic media is harder to win. Last year only 46 of the nearly 1,100 entries from around the world got the necessary unanimous vote from the board of judges. None is more coveted.

As Walter Cronkite once observed, “You count your Emmys, you cherish your Peabodys.” Or, as Stephen Colbert more recently put it, a Peabody is “like an Oscar wrapped in an Emmy inside a Pulitzer.”

The Peabody Awards' 74th search for excellence is now underway. If you produced a dramatic series, a podcast, an investigative news report, a web documentary, a PSA, any form of story that matters during this calendar year 2014, now is the time to start prepping your entry. It's time to test your work against the best in the world.

Entry information is available at PeabodyAwards.com. The deadline is January 15, 2015.

While the Peabodys don't value any genre above another and fill no categorical quotas, there is hope that entries in a few areas will increase this time around:

Children's programming — because submissions in this important subset, which has winners stretching back to “Howdy Doody,” “Captain Kangaroo” and “Sesame Street,” have dwindled in recent years.

Digital content — while an array of quality digital narratives are being created, many practitioners are only beginning to recognize their eligibility.

International — because the ambition and quality of programming worldwide is unquestionably on the rise and the Peabodys have always been open to excellent work from outside the U.S.

“This is an exciting time for creative storytelling across so many locations of the expanding media landscape,” said Jeffrey P. Jones, director of the Peabody Awards. “We are aware of quality narratives being told in children's programming, in digital spaces, even internationally. The Peabody Board of Jurors would really love to see more from these areas, and highly encourage producers to submit their work.”

The Peabodys are electronic media's oldest prize, established by the National Association of Broadcasters in 1940 but left to the University of Georgia's Grady College of Journalism and Mass Communication to administer independently.

For decades, the Peabodys have recognized distinguished achievement and meritorious public service by television and radio stations, networks, producing organizations and individuals, but the award's scope is always expanding. The Peabody program welcomes entries produced for alternative means of electronic distribution, including podcasts, websites, Internet videos (on YouTube, Vimeo, or other internet streaming platforms), video games and educational media.

The 73rd edition of the awards, presented in New York in May, were emceed by multiple Peabody winner Ira Glass, creator of public radio's “This American Life.” Other recent hosts have included Diane Sawyer, Sir Patrick Stewart, Brian Williams and Jon Stewart.

Recipients at the 73rd ceremony ranged from ABC's “Scandal” to the interactive documentary “Hollow,” from Netflix's “Orange Is the New Black” to “Burka Avenger,” an animated children's program from Pakistan.

The sci-fi serial “Orphan Black” got a Peabody in May. So did “FRONTLINE's” investigation of the National Football League's concussion crisis, reports on political chicanery by TV stations in Nashville and New Orleans, and the musical documentary “Six By Sondheim.” Diversity is one of the hallmarks of the award.

Potential entrants regardless of genre should be aware that the competition is fierce and, as noted, only programs that receive the unanimous support of our distinguished, 18-member board of academics, industry practitioners and critics make the final list.

But to win a Peabody Award is to join an elite group of program creators who not only have achieved greatness in their storytelling but also have added to our knowledge, stoked our empathy, or somehow contributed to human understanding and public life. The Peabody medallion is not a trophy; it's a badge of honor, respected throughout the media world.

For further information regarding the Peabody Awards, call 706-542-3787, e-mail the Peabody office at peabody@uga.edu, or visit the Peabody website.