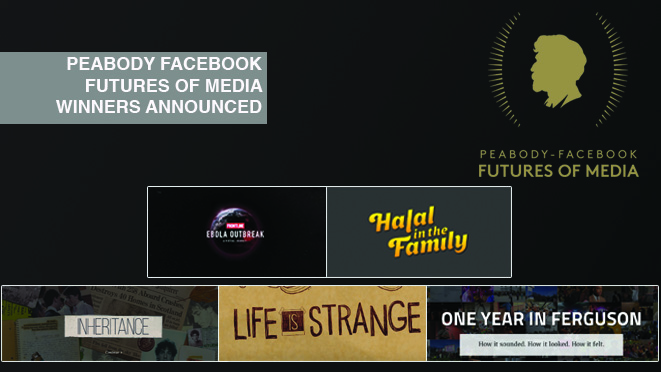 The name’s inclusion of “Futures” refers to the judges who choose the award, student Peabody Fellows at the Grady College of Journalism and Mass Communication at the University of Georgia, and the role young people play in shaping our shared future, as well as the honorees who are using digital technologies to blaze a trail for the future of innovative storytelling.   The Futures of Media Award will honor the year’s top five stories in digital media.

This year’s award recipients represent a variety of approaches to digital storytelling, including a parody sitcom web series challenging anti-Muslim bias, the immersive experience provided by virtual reality technology for understanding the Ebola crisis, an interactive web documentary centered on memory, grieving, and loss, a curated radio/audio-photography retelling of the complex story of Michael Brown and Ferguson, Missouri and a non-linear videogame that combines and subverts classic genres while challenging how videogame narratives are told.

The Peabody Awards, the oldest and most prestigious award for electronic media, have recognized various forms of digital content since 2003. The Futures of Media Award, however, is a separate and distinct award from the main Peabody Awards.

Jeffrey P. Jones, Director of the Peabody Awards, noted the importance of the partnership. “I couldn’t be more pleased to have Facebook, one of the preeminent technology and media companies in the world, as our partner for these awards,” Jones said. “These award winners represent the cutting edge of how stories can be told in digital spaces. Facebook is at the forefront of shaping how we learn about, share, discuss, and experience stories such as these.”

The five Futures of Media winners will be flown to New York City for a presentation luncheon at the Paley Center for Media on Friday, May 20 and then recognized at the Peabody Awards ceremony on Saturday, May 21. Both events will be streamed on the Peabody’s Facebook page via Facebook Live.

The Futures of Media Award is just one aspect of a three-year Peabody project in partnership with Facebook. In addition to celebrating the Student Honor Board's selections, Facebook will also participate in this year's Peabody Awards ceremony.   Peabody will be using Facebook Live during the ceremony to provide red carpet and behind the scenes access to their followers in real-time.  The evening’s coverage will be hosted by Ana Kasparian from the Young Turks.

“The pace of innovation in digital storytelling is inspiring and these winners demonstrate some of the possibilities to leverage new technologies,” said Andy Mitchell, Director of Global News & Media Partnerships, Facebook. “To partner with Peabody on this award and have all the winners shown on FB Live, one of the many new digital products inspiring this innovation, is an honor.”

Facebook
Founded in 2004, Facebook's mission is to give people the power to share and make the world more open and connected. People use Facebook to stay connected with friends and family, to discover what's going on in the world, and to share and express what matters to them.

Peabody Awards
Peabody is an organization dedicated to invigorating people through the power of stories. Founded in 1940, Peabody honors and extends conversation around stories that matter in radio, television, and digital media through symposiums, screenings, podcasts and an annual awards ceremony considered to be among the most prestigious in the entertainment industry. Peabody gives awards for news, entertainment, documentaries, children’s programming, education, interactive programming, and public service, in turn, encouraging the media industries to reach for and achieve the highest standards. Peabody is administered through the Grady College of Journalism and Mass Communications at The University of Georgia. For more information, visit peabodyawards.com or follow @PeabodyAwards on Twitter.