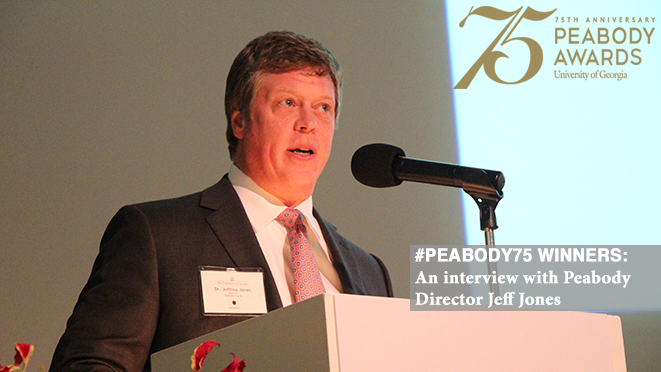 For 75 years, the Peabody Awards have been a beacon for excellence in radio, television and electronic media. Now more than ever, the Peabodys are helping to curate what shows should be listened to and watched.

Peabody Awards Director Jeffrey P. Jones took some time to discuss the themes and messages of this year’s winners.

Jones began by pointing out that in an era where there are more than 400 scripted shows on television and subscription services, as well as a wealth of new material from the Internet, there is no shortage of excellent programming.

“Peabody is the only organization that is so thoroughly interdisciplinary and all-encompassing of electronic media programming,” Jones said.

The Peabody Awards are selected by an 18-person Board of Jurors who meet several times throughout the spring for face-to-face deliberations. All the winners are decided on by a unanimous vote.

This year Peabody is awarding multiple categories including news (5), entertainment (10), documentary (9), children’s (1) and public service (1) awards. Formats recognized are diverse including television (25), radio/podcasts (4) and web/interactive (1, not including the Peabody Facebook Futures of Media awards which are a new brand extension).  And, the awards span from local news (3) to international (6) programming. A complete list of this year’s winners can be found after the interview.

Following are other excerpts from the conversation:

Grady College: What makes the Peabody Awards different from other awards?

Jeff Jones: One of the things is that Peabody has always been diverse. This year, our awards represent diversity in 33% of the shows and their themes. Examples this year include “black-ish,” “Beasts of No Nation” and Stanley Nelson’s individual award. A few years ago, in 2011, 51% of our awards were awarded to shows with diverse themes.

Another area that makes the Peabody Awards so distinctive, whether we are talking about news or documentary or entertainment, is that they hit major social issues. This year, for instance, identity is a theme as portrayed in “Master of None” and “Transparent.” The theme of rape or abuse is seen in “Jessica Jones” and “India’s Daughter.” Surveillance and corporate control is a theme in “Mr. Robot,” and the website “Do Not Track.”

GC: There are a lot of streaming services and cable channels on the list this year. Why is that?

JJ: Netflix is back with some winners and Amazon is on the list for the first time. These services, like another winner, HBO, are not dependent on advertising.  On network TV, for instance, dramas have to be written to break to commercials, and then the narrative has to pick up again coming out of commercial. That shapes how the story can be told through its narrative flow. What we’ve seen in the last 20 years is how subscription services such as HBO offers narratives that are different because they aren’t having to write for an advertisement-driven media.

Advertisement-driven media is dependent on audience tune-in and the demographics associated with that. What you are getting on network TV is driven by who’s watching. On the subscription services, it’s measured by monthly users. So, what Netflix and Amazon and similar services are doing is that they are trying to garner a lot of critical praise. They are playing a whole different game. HBO started it, but now Netflix and Amazon and others are trying to write these quality, prestige dramas and comedies. And from a critical perspective, it seems to be working.

Peabody 75th Anniversary from UGA Development and Alumni on Vimeo.

GC:  There seem to be a lot of documentaries recognized this year.

JJ:  As the regulatory environment changed, a lot of burden fell and still does, to public television for quality documentary work. Shows like “American Experience,” “American Masters,” “Frontline,” “POV: Independent Lens”… they still win. But HBO has also been this major force since the early 1980s in the amount of money they spend on documentaries. All these players now want to compete with HBO, so they are creating documentaries as well.  This year Showtime’s doc on Marlon Brando (“Listen to Me, Marlon”) and Netflix’s doc on Nina Simone (“What Happened, Miss Simone?”) won awards. So what HBO did is put a lot of money in and produced tons of great documentaries, and by being successful, they showed that documentaries are something that people liked to watch on the subscription networks.

Public radio and television is doing what it has always done in documentary. There are several public media wins, including “This American Life” (“The Case for School Desegregation Today”) and NPR (“Secret Mustard Gas Experiments”). Public media consistently produces shows that the Peabody Board thinks is quality programming as well as good for us as citizens.

GC: What other themes have you noticed this year?

Following is a complete list of Peabody Award winners:

Beasts of No Nation — Netflix

Do Not Track — donottrack.us

Going Clear: Scientology and the Prison of Belief — HBO

How to Dance in Ohio — HBO

Listen to Me Marlon — Showtime

Master of None — Netflix

The Case for School Desegregation Today — This American Life

The Jinx: The Life and Deaths of Robert Durst — HBO