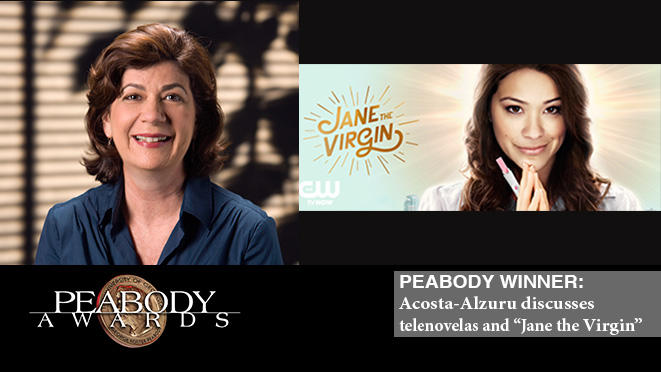 The Peabody Awards, long recognized for being a harbinger for cultural hipness in electronic media, is adding exposure to a very popular television genre in Latin America—the telenovela. While “Jane the Virgin,” a Peabody Award winner this year, has similarities to telenovelas, there are several significant differences according to Carolina Acosta-Alzuru, an associate professor of public relations at UGA’s Grady College of Journalism and Mass Communication and instructor of the class, Telenovelas, Culture and Society.

Acosta-Alzuru is one of the leading authorities on the telenovela genre and has authored several books on the subject, including her most recent book, “La incandescencia de las cosas: Conversaciones con Leonardo Padrón” (Alfa, 2013).  Written in Spanish, the book is an analytical conversation with Leonardo Padrón, an award-winning telenovela writer and poet from her native Venezuela.

“Jane the Virgin” is a tongue-and-cheek look at a young Latina woman’s life as she manages living with her single mother and virtuous grandmother in Miami.  When she is accidentally inseminated, her life turns into a tailspin of juggling the relationships with her family, meeting her long-absent father (who, coincidentally, is an actor in a telenovela), keeping peace with her fiancée and working with the biological father of her baby, who Jane has had a crush on for years.

Telenovelas are like American soap operas in that they are broadcast daily and that they have a finite number of episodes lasting just one or two seasons.

“Audiences engage differently with shows that they watch daily from beginning to end—like telenovelas—than with weekly shows that have an inter-season pause of weeks, like U.S. series,” Acosta-Alzuru notes.

Telenovelas are a popular staple on Telemundo and the Univision Network, one of the top five highest-rated broadcast networks in primetime. “Jane the Virgin” airs once a week on The CW.

“Jane the Virgin” does borrow some traditional themes from telenovelas, however, including the intricate intertwining of characters and plots, the repetitive use of flashbacks and the use of incidental music.

“The series also makes references to telenovelas that these melodramas' lovers will recognize, like the reference to one of the most evil characters in telenovela history, Catalina Creel,” Acosta-Alzuru adds. “At the same time, the show also twists and exaggerates some of the telenovela staples to increase humor. For example, traditional telenovelas, as opposed to more realistic ones, present rags to riches “Cinderella” stories. 'Jane the Virgin' takes that most literally and brings in an evil stepmother and two villainous stepsisters for Jane. Jane’s father, Rogelio de la Vega, also presents the most stereotypical view of the telenovela genre: over the top, sugary, campy.”

“Like all stereotypes, 'Jane the Virgin' is a limited representation,” Acosta-Alzuru concluded. “It leaves out a significant portion of the telenovela universe like those that speak to their audience in terms of a shared reality including complex characters and topics like politics, health and sociocultural subjects. These are telenovelas that would never include a protagonist like Rogelio de la Vega. Therefore, 'Jane the Virgin’s' audience sees a partial view of telenovelas, skewed by stereotypes about the genre.”

More information about “Jane the Virgin” and other Peabody Award winners for entertainment, can be found here.