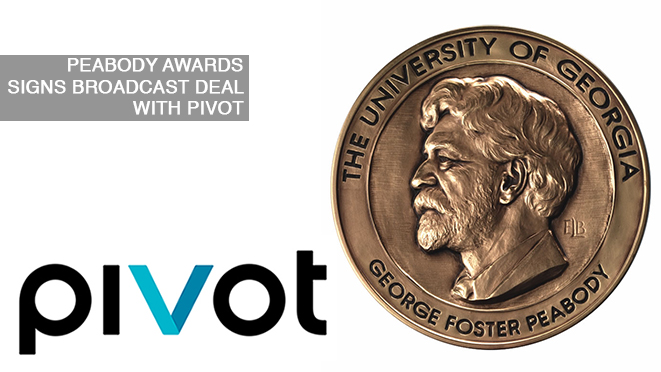 The University of Georgia’s George Foster Peabody Awards, considered among the most prestigious prizes in electronic media, and Pivot, Participant Media’s television network targeting millennials, have agreed to a multi-year strategic alliance beginning this year and spanning through 2016, the Peabodys’ 75th anniversary.

The announcement was made today by Jeffrey P. Jones, director of the Peabody Awards, and Evan Shapiro, president of Pivot.

Beginning this spring, Pivot will be the exclusive broadcast home for the annual event. The network will produce and televise original prime-time specials spotlighting the annual winners selected by the Peabody adjudication board. The honorees will be announced April 2. The Peabody medallions will be presented May 19 at a luncheon ceremony at New York City’s Waldorf-Astoria hotel. The 2014 Peabody Awards special, premiere date to beannounced, will blend highlights from the presentation ceremony with exclusive interviews with featured award recipients.

Pivot, whose focus is entertainment that inspires social change, continues to break new ground. The Peabody Awards recognize a wide range of narratives, from entertainment programming to news, documentary and public interest content. Pivot and its digital platform, TakePart.com, will celebrate this special brand of storytelling and provide background on the long history of the awards to a national television audience. The agreement marks the first time in over a decade that the awards ceremony has had a broadcast home.

“Pivot was a natural choice for us,” said Jones, who last June became the awards program’s fifth director. “For 73 years, we have honored ‘storytelling that matters,’ and Pivot’s emphasis on entertainment that inspires action and change makes them the perfect home. Together we hope to bring greater attention not only to those in electronic media who are producing quality work, but also to the importance of the stories they are telling.”

“The Peabody Awards is one of the most important and prestigious honors in media,” Shapiro said. “It’s our mission at Participant Media and now with Pivot to elevate the impact of stories that matter. We are honored to bring this show to television so that a larger audience can celebrate the extraordinary work of these enlightened storytellers.”

The Peabody Awards, the oldest award in electronic media, were first presented in 1941. For the last several decades, the ceremony has been hosted by a who’s who of industry notables, from Walter Cronkite to Jon Stewart. Recognizing distinguished achievement and meritorious service around the world by broadcasters, cable and Webcasters, producing organizations and individuals, the awards are administered by the Grady College of Journalism and Mass Communication at UGA. Winners are selected by the Peabody Board, a 16-member panel of distinguished academics, television critics, industry practitioners and experts in culture and the arts. For more information regarding the Peabody Awards program, see www.peabodyawards.com or follow @Peabody_Awards on Twitter.

Pivot (Pivot.tv), launched nationally Aug.1, is a television network from Participant Media serving passionate millennials (18-34) with a diverse slate of talent and a mix of original series, acquired programming, films and documentaries. Pivot focuses on entertainment that sparks conversation, inspires change and illuminates issues through engaging content and, through its website, TakePart.com, connects audiences to a wealth of content and customizable actions. Pivot is available via traditional Pay TV subscription and integrates a live and on-demand streaming option via its interactive, downloadable Pivot app. In both content and delivery, Pivot is “TV for The New Greatest Generation.”

About Participant Media
Participant (ParticipantMedia.com) is a global entertainment company founded in 2004 by Jeff Skoll to focus on feature film, television, publishing and digital content that inspires social change. Participant’s more than 45 films include “Good Night, and Good Luck,” “Syriana,” “An Inconvenient Truth,” “Food, Inc.,” “Waiting for ‘Superman,’” “The Help,” “Contagion” and “Lincoln.” Through its films, social action campaigns, digital network TakePart.com and Pivot, Participant seeks to entertain, encourage and empower every individual to take action.

About Grady College
The Grady College offers undergraduate majors in journalism, advertising, public relations, digital and broadcast journalism and mass media arts. The college offers two graduate degrees and is home to the Knight Chair in Health and Medical Journalism and the Peabody Awards, internationally recognized as one of the most prestigious prizes for excellence in electronic media. For more information, see http://grady.uga.edu or follow @UGAGrady on Twitter.