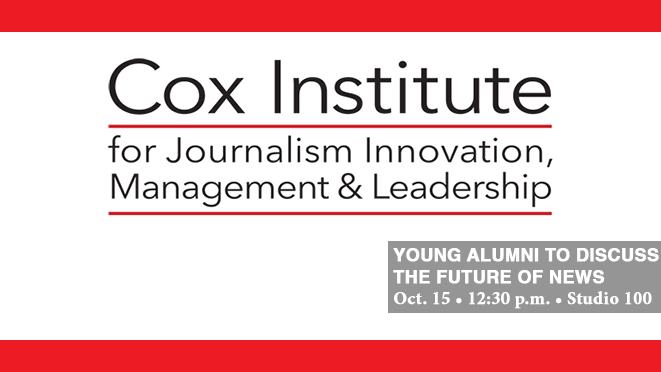 Three Grady graduates will return during Homecoming Week for the latest installment of the Cox Institute Presents lecture series, “Young Alumni in a Conversation on the Future of News.”  The panel will run from 12:30 to 1:45 p.m. on Thursday, Oct. 15, 2015 in Grady College’s Studio 100.  It is free and open to the public.
Polina Marinova (ABJ ’13), John Newsome (ABJ ’11) and Cailin O’Brien (ABJ ’14) will offer their insights about the future of the news business drawn from their early career experiences. They will address the shift to mobile delivery and what they see as future career paths for aspiring Grady journalists. Grady students Macey Kessler and Kendall Trammell will moderate.
“Our young alumni see things a little bit differently in the first few years of their careers than someone that’s been around for a while. In a way, they may be a little more realistic about what the future holds for our students,” said Diane Murray, the director of alumni service and outreach at Grady.
Murray, who is helping coordinate the panel, encourages students to attend and “get the perspective of somebody who is recently out of school, who can relate to what it’s like to be sitting in the classroom and wondering what the next few years look like,” she said.
About the panelists:
Polina Marinova is the audience engagement editor for Fortune Magazine after moving to New York as the social media editor for media start-up OZY.com.  Marinova was the editor-in-chief at The Red & Black and interned at USA Today, CNN and Morris Communications. At Grady, Marinova was a Cox Poynter Leader and McGill Fellow. After graduation, Marinova was an independent journalist landing assignments as a producer for CNN and as a community manager for USA Today.
John Newsome is a news editor on the national assignment desk at CNN, responsible for newsgathering and CNN crews in the Southeast, Northeast, MidWest and West. He began his career at CNN as a video journalist immediately following graduation from UGA. While a student at Grady, he interned at ABC and NBC News. He is currently pursuing an MBA at Georgia Tech.
Cailin O'Brien is a government beat reporter at The Clayton News and was named by the Georgia Press Association as the 2015 Emerging Journalist of the Year in the statewide non-daily division.  O'Brien was a reporter and news editor at The Red & Black and interned on the breaking news desk at The Atlanta Journal-Constitution.  At Grady, O'Brien was a Cox Poynter Leader and studied business journalism on Wall Street as part of a Cox Institute fellowship with the Society of American Business Editors and Writers.
Date: October 8, 2015
Author:  Keith Herndon, klhern@uga.edu
Contact:  Keith Herndon, klhern@uga.edu