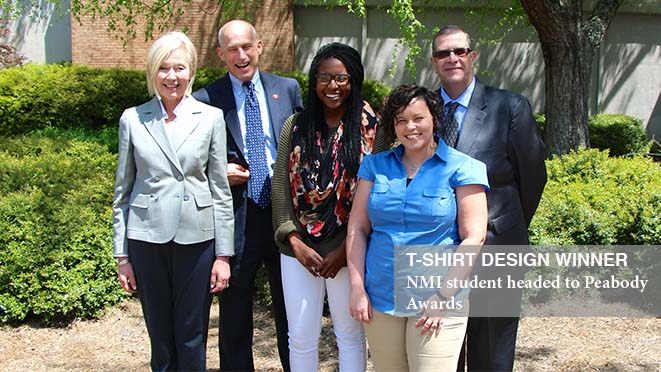 When Noemie Tshinanga, a senior in the New Media Institute, began brainstorming design concepts that would best represent the upcoming Grady College centennial, she knew she wanted to create a logo that would merge the concepts of “old school” and “new school.”

She settled on a design that she describes as a classic look with a timeless font.

Tshinanga was one of more than two dozen Grady students who entered the college’s spring T-shirt design contest, which was judged by a committee of faculty and staff members.

As the winner, Tshinanga’s design will appear on T-shirts that will be given to incoming Grady students this fall.  She also scored a trip to the 73rd annual Peabody Awards ceremony on May 19, including airfare and a two-night hotel stay in New York City.

“I was speechless when I found out,” Tshinanga said. “I called my sister and she was screaming for me!”

It will be Tshinanga’s first trip to New York, and in addition to the Peabody Awards luncheon, she’s looking forward to the post-ceremony bash.  Scott Shamp, NMI director, said he also plans to put her in contact with NMI alumni in the area during her visit.

“I think I may cry when I get on the plane,” Tshinanga added.

“We were just delighted that Noemie’s playful, nostalgic design won the competition, and that she will soon be on her first trip to New York — and to see the Peabodys!” said Charles Davis, dean of the Grady College. “We will be incorporating her design into all sorts of Centennial-related items throughout the fall of 2014 and all of 2015, as Grady celebrates its Centennial. This is a once-in-a-lifetime opportunity for us, and for Noemie.”

Tshinanga will graduate in December 2014 with a bachelor’s degree in management information systems and an NMI certificate.