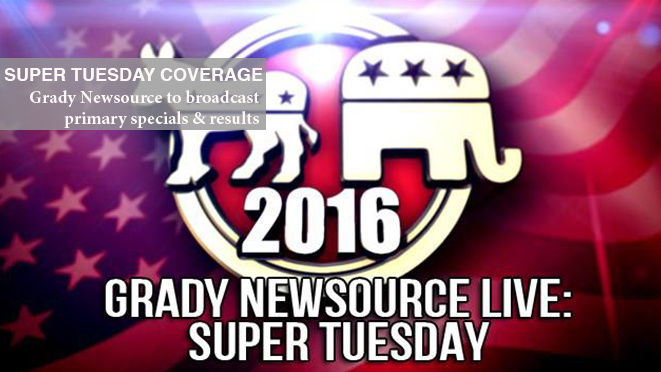 Three primary election day specials will air live: a preview show at 1 p.m., updates at 5 p.m. and an hour-long results show at 10 p.m. In addition, students will be posting continual updates on gradynewsource.uga.edu and on Facebook, Instagram, Twitter and Snapchat.

“Election day coverage is everybody’s most demanding and most rewarding news coverage, anywhere,” said Michael Castengera, one of the day’s three executive producers along with fellow faculty members Dodie Cantrell and David Hazinski.  “It is so critical because so many people are concerned about it and want to know what’s happening.”

All of the shows will air on UGA channel 15.1 and Charter Cable 181. They also will stream on gradynewsource.uga.edu.

The 1 p.m. show will be broadcast from the Grady College’s Peyton Anderson Forum and will feature a panel with Russell Edwards, chair of the ACC Democratic Committee; Stephen Greenway, state chairman for Georgia Association of College Republicans; and Josh Putnam, SPIA lecturer at UGA and campaign analyst.

Students prepare in advance of a special broadcast March 1 at 1 p.m in the Peyton Anderson Forum that will cover Super Tuesday. Photo by Grady Newsource.

“This actually was instigated completely and solely by the students, and that’s what makes this particular Election Day special cool,” Castengera said.

It will be produced by Danielle Herman and directed by Miles Moraitis.  Dillon Richards will anchor.

“I’m excited because I’ve never anchored before and a lot of our show won’t be scripted, so I’ll be able to improv and interact with people,” said Richards. “Plus, I love covering elections.”

Members of the public are invited to sit in the audience and are asked to arrive by 12:30 p.m.

“This is the kind of public service journalism that makes journalism a higher calling than many other jobs,” said Castengera. “We are, or can be, the major local election news coverage source for Athens and Northeast Georgia.  So it is a serious responsibility.  I think the students sense that feeling and respond.  They know they are doing something fun… and important.”

Grady Newsource is a student production of the University of Georgia Grady College of Journalism and Mass Communication.