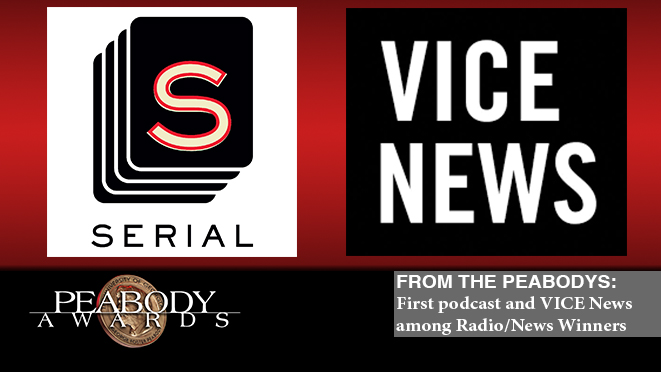 New players and platforms elbowed into the ranks of the usual News and Radio suspects in the 74th annual Peabody Awards, with the podcast sensation “Serial” becoming the first of its kind to win a Peabody and the online VICE News earning recognition for visceral reports about ISIS and a high school for troubled teens, respectively.

Other News and Radio winners announced Monday by the Peabody Awards program at University of Georgia ranged from CNN’s high-impact coverage of scandalous treatment-delays at Veterans Administration hospitals to an Austin TV station’s investigation of costly inadequacies in Texas’ mental health care policies.

“In addition to the stalwarts of radio and news, winners such as ‘Serial’ and VICE News demonstrate how new avenues and approaches to storytelling can have a major impact on how we understand truth, reality, and events,” said Dr. Jeffrey P. Jones, Director of the Peabody Awards.

“Serial,” an audio sensation that’s been downloaded more than 60 million times, is an investigative miniseries in which the case against a young man facing life in prison for murder is painstakingly examined over 12 installments.

VICE News was saluted by the Peabody Board of Judges for “Last Chance High,” an unflinching look at a Chicago high school whose high-risk students are running out of options, and “The Islamic State,” an astonishing series of reports from a journalist “embedded” with ISIS volunteers in Iraq and Syria. Reporter Medyan Dairieh is shown quizzing Muslims who have migrated to the caliphate and zooming around the Syrian city of Raqqa in the jeep of the new “morals police.” In a particularly unsettling sequence, he observes something approaching a jihadist revival meeting in a commandeered and desecrated Christian church.

In addition to its coverage of sometimes fatal delays in care at VA hospitals, CNN was cited for its correspondents’ daring, multi-faceted  reporting from Nigeria about the kidnapping of 200 schoolgirls by the terrorist group Boko Haram.

NPR was recognized for “Gangs, Murder, and Migration in Honduras,” an edition of its “Latino USA” series that made vividly clear what’s motivating Hondurans by the thousands to attempt exodus to the U.S., and for “Reporting from the Frontlines: The Ebola Outbreak,” a crucial international story that NPR reporters identified early and exhaustively pursued.

WNYC earned kudos for “60 Words,” a close parsing of the post-9/11 Authorization of Use of Military Force (AUMF) Act and what its broad language has meant in terms of warfare and secrecy. In collaboration with New Jersey Public Radio, the New York City public-radio outlet also won for “Chris Christie, Presidential Ambitions and the Abuse of Power,” a string of news reports about the “Bridgegate” scandal and its political repercussions.

Continuing coverage of ISIS by NBC News, MSNBC and msnbc.com  –  in particular NBC’s phenomenally well-briefed chief foreign correspondent, Richard Engel – was cited for a news Peabody, as was “Betrayed by Silence,” in which Minnesota Public Radio unearthed stunning new evidence of sexual abuse and cover-ups in the Archdiocese of St. Paul and Minneapolis.

“The Cost of Troubled Minds,” a winning investigative entry by Austin’s WVUE-TV, found that Texas’ cuts in mental health care programs not only left a vulnerable population underserved but, in fact, cost the state more money.

“Under the Radar,” an eye-opening series from Scripps.com, explained in alarming detail how sex offenders in the military get released into civilian communities with little or no apparatus in place for identifying them, let alone keeping track.

A Peabody also was awarded to “State of the Re:Union,” a refreshing radio series from WJCT Public Broadcasting, Jacksonville, that focuses on stories about people throughout the U.S. who are taking charge of their communities’ problems and getting results. In a year when the news media in general has dramatically improved the ways that it has dealt with transgender issues, the “Re:Union” episode on transgender families stood out for its commitment to dealing in a dignified and diverse way with the challenges confronting transgender people.

The Peabody Awards for documentary, public service, education, and children’s programming will be announced Thursday, April 23, on the Peabody website, www.peabodyawards.com.

As previously announced, Individual and Institutional Peabodys are respectively going to Sir David Attenborough, the renowned British nature documentarian, and “Afropop Worldwide,”a long-running public-radio series devoted to the diasporic music of Africa.  The entertainment winners for the calendar year 2014 are “The Americans,” “Black Mirror,” “Fargo,” “The Honorable Woman,” “Inside Amy Schumer,” “Jane the Virgin,”  “The Knick,” “Last Week Tonight with John Oliver” and “Rectify.”

These and other winners of the 74th annual Peabodys will be presented with their awards on Sunday, May 31, at the first-ever nighttime, red-carpet Peabody ceremony. Fred Armisen, a Peabody winner for his work on “Saturday Night Live” and his series “Portlandia,” is set to host the gala at Cipriani Wall Street in New York. Pivot, Participant Media’s TV network, will premiere “The 74th Annual Peabody Awards on Pivot,” a 90-minute special on Sunday, June 21 at 9pm ET/8pm CT.

This sobering investigative documentary took listeners inside the child sex-abuse scandal in the Archdiocese of St. Paul and Minneapolis, uncovering among other things how the archbishop who headed of the committee that wrote the U.S. Catholic Church's landmark abuse policy – the Charter for the Protection of Children and Young People – not only failed to follow it but participated in cover-ups.

In a series of pithy news reports about the “Bridgegate” scandal, WNYC helped to link a disruptive bridge closure to a broader pattern of questionable political operations by New Jersey Gov. Chris Christie’s office. Its coverage sparked national news attention, high-profile resignations in the Christie administration, and criminal investigations into the Port Authority.

CNN approached the Boko Haram kidnapping horror from many angles, even moving Isha Sesay’s daily show to Abuja to raise the profile of the #BringBackOurGirls campaign. Sesay’s tough, live-TV interviewing, along with high-risk field reporting of Nima Elbagir, Arwa Damon and other CNN journalists, made the network’s coverage comprehensive and indispensable

High-impact journalism, CNN’s investigation into delays in care at Veteran Affairs hospitals exposed a systemic VA breakdown, eventually leading to the resignation of VA Secretary Eric Shinseki, the passage of federal legislation, and a dramatic change in how veterans’ medical appointments are made, recorded and reported.

Reports on NBC and MSNBC about the rise of ISIS had an unsurpassed depth, contextualization and clarity thanks in large part to NBC News’ chief foreign correspondent, Richard Engel, whose years of experience in the Middle East  proved invaluable.

Students at Chicago’s idyllic-sounding Montefiore Therapeutic Day School are actually one mistake away from jail or a mental hospital. This dramatic series of web reports and podcasts delved sympathetically but unsentimentally into their lives, contextualizing their problems and giving them a chance to speak.

Vivid and scary, this hour-long report by Maria Hinojosa and “Latino USA” producer Marlon Bishop makes it clear why large numbers of Hondurans seek to escape the violence back home and enter the U.S.

NPR had a reporter in Guinea in early April, months before even world health officials understood the magnitude of the Ebola threat, and its coverage throughout 2014 was unsurpassed in scope and variety: insightful reports that didn't feature just Western experts, but also doctors, nurses, government officials from the heart of where Ebola was breaking out.

A audio game-changer, this compelling, multi-episode podcast closely examined the evidence against an 18-year-old facing a life sentence for murder, illuminating disturbing flaws in the justice system along the way. The first unquestionably mainstream podcast, it has been downloaded nearly 60 million times.

A “Radiolab” collaboration with Buzzfeed reporter Gregory Johnsen, it takes a hard, disturbing look at the broad, malleable wording of the Authorization of Use of Military Force Act, approved by near-unanimous Congressional vote shortly after the 9/11 attacks, and how its interpretation has expanded military power and secrecy.

The great news about SOTRU is that it purveys good news– not soft, sugarcoated features but grassroots reporting that demonstrates how everyday people, both rural and urban, are figuring out ways to tackle their communities’ problems.

Mark Greenblatt’s outstanding, exhaustive investigative review of court martial cases uncovered more than 240 convicted rapists, child molesters and other sex offenders who have slipped through loopholes that allow them to stay off public sex-offender registries when they leave the brig and return to civilian life.