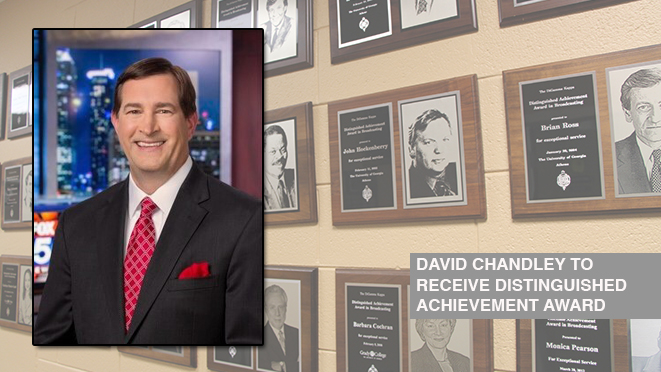 The University of Georgia Grady College of Journalism and Mass Communication’s national broadcast society, DiGamma Kappa, will present David Chandley with its annual Distinguished Achievement in Broadcasting and Cable Award.

The award will be presented Feb. 19 at DiGamma Kappa’s annual awards banquet at the Richard B. Russell Building Special Collections Libraries.

Chandley, a 1984 graduate of Grady College, currently serves as the chief meteorologist at FOX 5 Atlanta (WAGA-TV).

“As journalism students, we are overjoyed and honored to have Mr. Chandley accept our award,” said Danielle Herman, a senior journalism student and director of events for DiGamma Kappa. “Many of our members have grown up watching him on the local Atlanta stations, so he has been an inspiration to many aspiring broadcasters in Grady. We’re very excited to welcome him back.”

Chandley joined FOX 5 Atlanta one year ago after working at WSB-TV for more than 25 years. He graduated from Grady College with a degree in broadcast journalism and also completed the broadcast meteorology program at Mississippi State University. Chandley holds the CBM (Certified Broadcast Meteorologist) designation from the American Meteorological Society, the highest mark of distinction and recognition available in broadcast meteorology.

Prior to his jobs in Atlanta, Chandley worked throughout the state of Georgia in Albany, Macon and Columbus. He has been honored with numerous awards, including seven Southeast Emmy Awards and countless nominations. Chandley has also received the Associated Press Best Weather Reporting Award 13 times, most recently in 2013.

The Distinguished Achievement in Broadcasting and Cable Award is presented by DiGamma Kappa and is co-sponsored by the Georgia Association of Broadcasters and Grady College. Previous winners include Amy Robach (2015), Gale Anne Hurd (2013) and Monica Pearson (2012).

DiGamma Kappa celebrates its 77th anniversary this year.  It is the nation’s oldest student broadcast society and was founded at Grady College.  DiGamma Kappa encourages student participation in all phases of production for television and radio, and fosters professional competence among its members.  It also strives to promote a high quality of broadcast journalism while adhering to outstanding ethical standards.