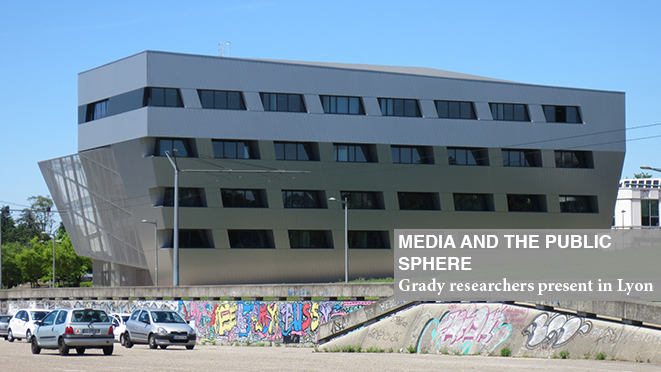 Media in a country need more than just financial resources to be viable, University of Georgia researcher C. Ann Hollifield told a gathering of international scholars at the University Lyon 2 in late June.

The media also need a legal framework that guarantees freedom of speech and media, governmental transparency, and access to information and accountability, said Hollifield, who specializes in media management and economics.

The media also need an environment that allows journalists to work safely and without fear, a justice system that holds accountable those who attack journalists, violate speech or corruption laws, or commit crimes, and an advertising market free of government control, said Hollifield, the Thomas C. Dowden Professor of Media Research at the Grady College.

Hollifield said a country’s media should be assessed by scholars and media advocates in terms of their “viability” as a way to lead to better media products.

Hollifield’s comments were part of her keynote address at the international conference on Media and the Public Sphere, New Challenges in the Digital Era, held June 18 and 19 at the French university.

Jacques Le Bohec, a professor from University Lyon 2, gave the second keynote address, on the paradox of Orwell’s 1984. LeBohec said that the novel was perceived in the past as describing the negative consequences of an authoritarian society on its members. Now, he added, with the use of new technologies on surveillance even in consolidated democracies, due to the terrorism threat, it can be read as a fable with broader meanings.

Approximately 30 scholars from Brazil, Canada, Israel, France, Romania, the United States and elsewhere were in attendance.

It was the fifth conference on the topic of Media and the Public Sphere organized by the three universities.

Cox Center Director Lee B. Becker and Associate Director Tudor Vlad attended the conference and presented a research paper focusing on journalism and mass communication education in the United States.

The researchers found that journalism and mass communication faculty members in the U.S. are becoming older but are less likely than 15 years ago to hold an advanced academic degree. Instead, they are more likely to have professional experience in communication occupations outside the university.

The paper, “Professionals or Academics? The Faculty Dynamics in Journalism and Mass Communication Education in the United States,” is available here.

The Cox Center is an outreach unit of the Grady College, which will host the conference in 2016.