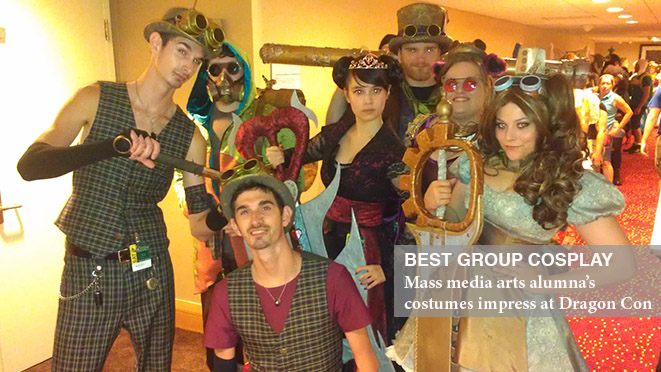 Grady College alumni and students were among the tens of thousands of science fiction, fantasy and comic book fans that assembled in Atlanta Aug. 29-Sept. 1 for Dragon Con 2014.

Anastasia Bandemir, a summer mass media arts graduate from Johns Creek, Georgia, combined her passion for fan culture with her newly acquired costuming skills to win the Best Group Cosplay award in the Cosplay Contest, a competition that serves as one of the highlights of the convention.

With the concept of a Steampunk version of “Alice in Wonderland,” Bandemir originally designed and handcrafted the prize-winning costumes — complete with weapons and props — for an independent study during her final semester at UGA.

“'Alice in Wonderland' is so fantastical that it leaves everything to the imagination,” she said. “And Steampunk is an idea that adds that extra uniqueness to any concept.”

Bandemir also wrote, produced and directed a documentary about the process, which she showcased along with a choreographed runway performance before graduation.

It was her third attempt at cosplaying — dressing up as a character — but her first time sewing costumes and making props.

“I taught myself how to sew and make the props using the Internet and YouTube,” she explained. “I've always been a perfectionist, so I wanted to do something that would really push me to the limit, something that I could potentially fail at. I wanted to prove to myself that I could accomplish whatever I set my mind to and that I can be successful in this industry.”

Bandemir entered seven of her nine costumes in the contest, and her handiwork stood out from the more than 50 entries. Along with the Best Group Cosplay bragging rights, she won Dragon Con swag and was featured in Atlanta Magazine.

“Just getting recognized for the work I did and having professionals get excited about my creations is more than I could ever ask for,” she commented. “Winning this contest was a huge boost of confidence and makes me excited for what I can and will do in the future.”

Bandemir says she couldn't have achieved the success she's had without the support of James Biddle, a senior lecturer of mass media arts at Grady College.

“Along with instilling all the important aspects of being a successful filmmaker, he encourages students to develop their skills and grow into the filmmakers they want to be,” Bandemir said of Biddle. “Not just film school carbon copies, but filmmakers who make their own choices and learn from their failures. Filmmakers who can use their uniqueness and creativity to take this industry to the next level.

“In my case, my goal is to find a job that focuses on production design, costuming, and prop making — a career choice that's very different from the majority of mass media arts students,” she continued. “And without my indie study project, I wouldn't have been able to see this goal as a possibility.”

Bandemir will soon have another chance to polish her craft. In the weeks leading up to Dragon Con, she landed a job as head costumer on a music video for the Atlanta comedy/rap band No Motivation.

“I can't say much at this point but I'm very excited to start this project,” she said. “It's going to be a lot of fun.”

Another Grady student also had a unique opportunity at this year's Dragon Con.

Cameron Johnson, a senior from Marietta, Georgia, majoring in mass media arts with a minor in film studies, worked as a handler for Jessica DiCicco, the actress who voices the character of the Flame Princess in the animated television series “Adventure Time.” Johnson met DiCicco last year in Athens at a seminar on voice acting and got the gig thanks to a recommendation from Professor Biddle.

At the convention, Johnson helped with everything from booth set up to keeping DiCicco apprised of scheduled appearances. He also worked closely with her fans, sold merchandise and calculated profits each day.

“It was cool being backstage at panels, running into other actors in the makeup room, and just receiving the VIP treatment everywhere we went,” he said of the experience. “Also, I'm a huge fan of the show 'Adventure Time,' so it took everything I had to hold in my excitement while just chilling with all of them.”