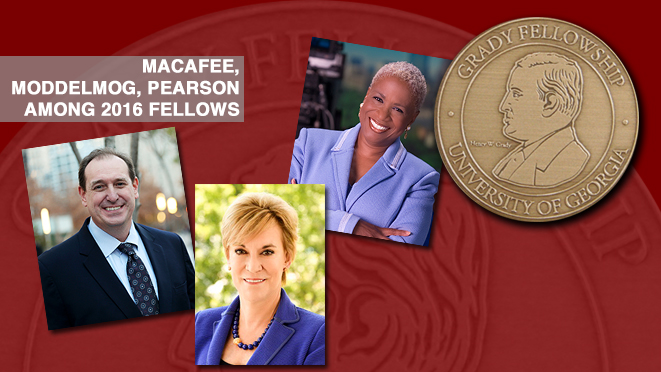 This is the third in a third-part series. Please view our first profiles of Tony Barnhart and Eddie Garrett, and Jeff Gregor and Jan Jones.

Brad MacAfee, Hala Moddelmog (MA ’81) and Monica Kaufman Pearson (MA ’14)  are among the seven honorees who will be inducted into the Grady Fellowship during “Grady Salutes: A Celebration of Achievement, Commitment and Leadership” on May 6.

Established in 2008, the Grady Fellowship honors friends of the college whose accomplishments, support and service to the industries they serve have made a positive impact on Grady College.

A highly respected business and communications leader, Porter Novelli Chief Executive Officer Brad MacAfee draws from more than 25 years of public relations experience on both the agency and corporate sides.

At Porter Novelli, MacAfee has held the roles of global technology practice leader and managing director of the Atlanta office. He is the longest-standing member of Porter Novelli’s executive committee. Prior to his current role, which he assumed this past February, MacAfee was president for all the agency’s offices in the U.S. and Canada.

MacAfee is a graduate of Indiana University where he earned a degree in telecommunications in 1992.

Hala Moddelmog is the first female president and CEO of the Metro Atlanta Chamber, which serves as a catalyst for business partnerships and coalitions to drive economic growth across the 29-county region.

Prior to joining MAC, Moddelmog was president of Atlanta-based Arby’s Restaurant Group. Moddelmog also served as president and CEO of Susan G. Komen for the Cure, the world’s largest grassroots organization working to eradicate breast cancer. She was also the first woman to lead an international restaurant company when, in 1995, she was named president of Church’s Chicken.

Moddelmog is a dedicated community advocate and serves on multiple boards including the Georgia Tech Scheller College of Business, the Georgia Public Telecommunications Commission and the Woodruff Arts Center, among others.

Moddelmog received an honorary doctorate from her undergraduate alma mater, Georgia Southern University. She has a master’s degree in journalism from Grady College.

Monica Kaufman Pearson is the first woman and first minority to anchor the daily evening news in Atlanta, Georgia, where she worked for 37 years at WSB-TV.  She has won more than 33 Southern Regional and local Emmy Awards for reporting, anchoring and “Closeups,” her celebrity interview show.

Pearson earned her undergraduate degree at the University of Louisville.

Read more about this year’s Grady Fellows inductees at http://t.uga.edu/2eJ