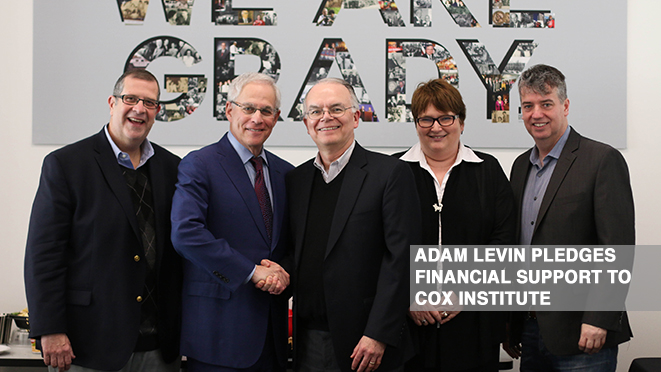 A pledge from author and consumer advocate Adam Levin has secured the future of a journalism leadership development program presented annually by the James M. Cox Jr. Institute for Journalism Innovation, Management and Leadership.

Levin’s pledge of $150,000, made on behalf of himself and his wife, Heather McDowell, will fund speaker expenses, provide training materials and sponsor the annual leadership awards banquet. The Cox Institute, which is part of the Grady College of Journalism and Mass Communication at the University of Georgia, began the leadership development program four years ago and has since trained 55 of the college’s best undergraduate journalism students who were competitively selected to participate.

“We are delighted to have the support of Adam Levin and Heather McDowell for this very important program at the Grady College,” said Charles Davis, dean of Grady College. “They share our vision and recognize the necessity of developing our students as future leaders of a news industry that is undergoing significant change as the digital transition continues.”

Levin is a consumer advocate with more than 40 years’ experience in personal finance, privacy, real estate and government service. He is the author of “Swiped: How to Protect Yourself in a World Full of Scammers, Phishers, and Identity Thieves” published by PublicAffairs. A former director of the New Jersey Division of Consumer Affairs, Levin is chairman and founder of Identity Theft 911, co-founder of Credit.com and has served as a spokesperson for both companies. Levin writes a weekly column which appears on Credit.com, The Huffington Post and ABC-News.com. He is a highly sought after commentator on cybersecurity and privacy issues, and is a frequent guest on programs including “MSNBC Live with Thomas Roberts,” “NewsNation with Tamron Hall,” “Fox Business Network After the Bell,” “Good Morning America,” “Fox & Friends,” “CBS Evening News,” CNBC, “ABC World News Tonight,” “ABC News Nightline,” “Fox News America’s News HQ” and scores of radio stations throughout the country.

“Heather and I are proud to support such an important program at a great American institution like the University of Georgia,” said Levin, “The development of professional journalists is paramount to our society. Now more than ever, we need people to be story tellers of this generation—to give voice to those who often have no platform and to have the courage to shine a spotlight on conditions and issues many would prefer to leave in the shadows. Having spent time at the Cox Institute, I cannot think of a better group of people to take on this challenge.”

Levin was introduced to the Cox Institute’s leadership program through Bob Sullivan, a Peabody Award-winning consumer journalist, who serves on the Cox Institute’s board of advisers. Sullivan is the author of the bestselling books “Gotcha Capitalism” and “Stop Getting Ripped Off.” He was a reporter for “In Plain Sight: Poverty in America,” an NBC documentary, which won a Peabody Award in 2013. The Peabody Awards are administered by University of Georgia’s Grady College.

“The support from Adam Levin and Heather McDowell recognizes the value of training that provides students with insights needed to make a difference in their careers,” said Keith Herndon, the journalism professor who directs the leadership program. “We also appreciate the leadership our adviser Bob Sullivan has provided in facilitating this important relationship.”

About the Cox Institute

The James M. Cox Jr. Institute for Journalism Innovation, Management and Leadership prepares students and professionals for leadership and entrepreneurial roles in the evolving news media. As digital technologies continue to transform the structures, practices and operations of journalistic enterprises, the Cox Institute is at the forefront of addressing strategic challenges faced by contemporary news organizations. As part of the Grady College, the Cox Institute sponsors a variety of training programs and applied research projects. The Cox Institute was established in 1990 by the late Conrad Fink, a legendary journalism professor in the Grady College, as the Cox Institute for Newspaper Management Studies. Its current name was adopted in 2014 to reflect an enhanced mission. The Institute honors the late James M. Cox Jr., who headed Cox Enterprises and Cox Broadcasting Corporation from 1957 until 1974. It is funded by the Jim Cox Jr. Foundation.