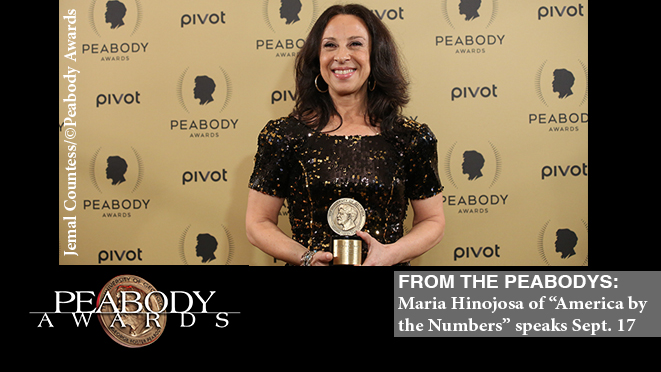 Peabody-winning journalist to screen documentary on diversity in Georgia

The University of Georgia’s Peabody Awards in partnership with the Latin American and Caribbean Studies Institute (LACSI) and the University of Georgia Libraries will present a screening and public discussion with special guest Maria Hinojosa at 12:30 p.m. on Thursday, Sept. 17, at the Richard B. Russell Building Special Collections Library. Hinojosa, the Peabody-winning host of the public radio program “Latino USA,” will speak and lead a public discussion on the topic “The New South: People of the New America.”

The event will include a screening of an episode of Hinojosa's PBS show, “America by the Numbers,” that assesses cultural diversity in Clarkston, Georgia, just 60 miles from UGA. She examines cultural interactions in Clarkston, a microcosm of America’s more diverse future since the community is home to immigrants from more than 40 countries. Following the screening and Hinojosa’s talk, there will also be a public discussion on the increasing cultural diversity in Georgia and the rest of the South.

The screening and public discussion are sponsored in part by a grant from the National Endowment for the Humanities and American Library Association.  Hinojosa’s visit kicks off a series of community events organized by LACSI and UGA Libraries coinciding with National Hispanic Heritage Month (September 15 to October 15). The events will be looking at the importance of Latinos in Georgia’s social, economic, and political fabric as well as the challenges that immigrants face.

“Maria Hinojosa’s visit gives us a perfect opportunity to celebrate a Peabody winner and present important information to Georgians about the demographic shifts the state has been undergoing,” said Jeffrey P. Jones, director of the Peabody Awards. “The extent of diversity in Georgia that her “America By the Numbers” report illuminates is a revelation.”

“Latino USA” won a 2014 Peabody Award for its episode “Gangs, Murder, and Migration in Honduras,” which the Peabody Board of Jurors praised for “giving us the economic context and the personal stories behind an international human rights crisis.” In addition to anchoring and executive producing “Latino USA” and “America by the Numbers,” Hinojosa in 2010 created the Futuro Media Group, an independent nonprofit organization producing multimedia journalism that explores and gives a critical voice to the diversity of the American experience.

In more than 25 years as a journalist, Hinojosa has worked for CNN, PBS, CBS, WNBC in New York, and WGBH in Boston. Her previous projects include PBS’s “Need to Know” series and the WGBH/La Plaza talk show, “Maria Hinojosa: One-on-One.” Hinojosa was the first Latina to anchor a “FRONTLINE” report. Aired in October 2011, “Lost in Detention” explored abuse at immigrant detention facilities, garnering attention from Capitol Hill to both the mainstream and Spanish-language media.

She is also the author of two books and has won dozens of awards, including four Emmys, a John Chancellor Award, a Studs Terkel Community Media Award, a Robert F. Kennedy Award, an Edward R. Murrow Award, and a Ruben Salazar Lifetime Achievement Award.  She is currently the Sor Juana Inés de la Cruz Chair of Latin American and Latino Studies at DePaul University in Chicago, and lives with her husband and their son and daughter in New York.

Peabody is an organization dedicated to invigorating people through the power of stories. Founded in 1940, Peabody honors and extends conversation around stories that matter in radio, television, and digital media through symposiums, screenings, podcasts, and an annual awards ceremony considered to be among the most prestigious in the entertainment industry. 2014 Peabody winners (awarded in 2015) include “Virunga,” “Serial,” “Inside Amy Schumer,” “VICE News,” and “Last Week Tonight with John Oliver.” Peabody is led by Jeffrey P. Jones and administered through the University of Georgia. For more information, visit peabodyawards.com or follow @PeabodyAwards on Twitter.