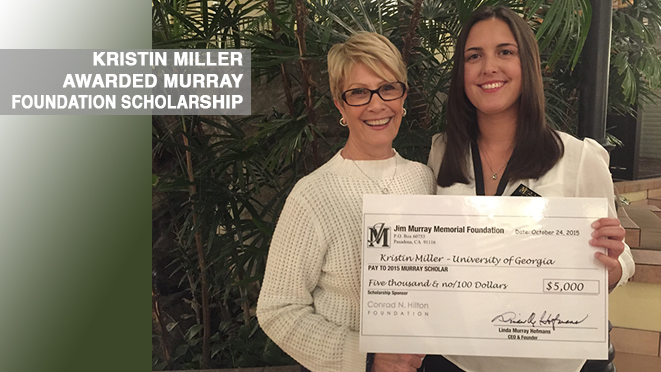 Kristin Miller, a digital and broadcast journalism student from Snellville, Ga., was awarded a $5,000 scholarship from the Jim Murray Memorial Foundation.

The Murray Scholars were recognized at the JMMF awards dinner in Arcadia, Calif. Oct. 24, 2015.

“I am extremely excited and proud to have been named a 2015 Murray Scholar,” said Miller. “Jim Murray was such an accomplished and well-respected journalist, and to be associated with him is a huge honor.”

Miller is in her senior year at UGA and plans to graduate spring 2016 with a bachelor’s degree in digital and broadcast journalism, a minor in communications studies and a certificate from the Grady Sports Media program. She is also a sports writer for the Red & Black, a student reporter for Grady NewSource and a play-by-play sports announcer for the Grady Sports Bureau. Miller wants to build a career in Atlanta as a sports reporter for one of the city’s professional teams.

“As a 2015 Murray Scholar, Kristin joins an elite group of young sports journalists,” said Vicki Michaelis, the John Huland Carmical Distinguished Professor in Sports Journalism and director of the Grady Sports Media program. “This is a prestigious addition to her resume and a sign of great things to come in her sports media career.”

The Foundation raises money to provide funds to college students studying journalism. To date, they have awarded 99 scholarships to students across the country and Miller is the first student at UGA to receive this honor.

To qualify for a JMMF scholarship, participants must an upper-class undergraduate student in his or her university’s School of Journalism. Each student must have at least a “B” GPA and submit an essay of 1,000 words, and no less than 750 words, on a pre-selected sports topic. The essay is pre-screened by each journalism department and then judged by a panel of national writers.