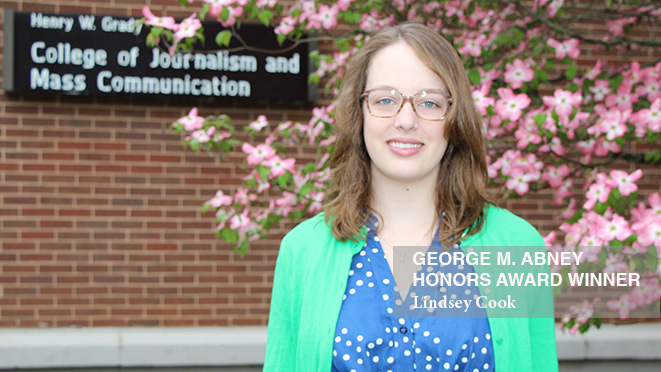 Lindsey Cook, a public affairs journalism major from Duluth, Ga., graduating this spring with High Honors, is the recipient of the 2013-14 George M. Abney Honors Award from the Grady College of Journalism and Mass Communication.

The college presents the award annually to the senior who has achieved the most impressive record in the Honors Program. It is named in honor of Professor Abney, who retired in 1993 after more than 40 years at the university. His tenure included 25 years as the Honors coordinator of the college and the college representative on the academic policy board of the UGA Honors Program.

“Lindsey Cook represents the embodiment of the Abney Award, symbolizing the very best of the best in academic and professional achievement,” said Charles Davis, dean of the Grady College. “Lindsey's record of scholarly and newsroom excellence sets the bar for future generations of Honors College students. Her story is one of perseverance and trailblazing accomplishment, breaking new ground for Grady students in the burgeoning world of data journalism.”

Along with her journalism degree, Cook adds a computer science minor and a New Media Institute certificate to her already impressive resume that includes internships with The Washington Post, Voice of America and The Atlanta Journal-Constitution, among others.

She was recently featured as a UGA Amazing Student and profiled for her many accomplishments by Quill, a magazine produced by the Society of Professional Journalists.

As one of only six Associated Press-Google Journalism and Technology scholars selected in 2013, Cook is wrapping up a yearlong project researching the recruitment and retention of female computer science majors and journalism's connection to computer science.

“If you think about the process of reporting a story, it's pretty much the exact same process of writing an algorithm,” Cook explained. “You're going to gather research. You're going to interview someone. Think of your hypothesis first – what's the question you're asking.”

Cook surveyed hundreds of students in both fields of study and conducted interviews with a sample of those participants as well as with professors. She plans to publish the results in the form of a website later this month.

“It's something that I'm very passionate about, and I think it's important to try to turn it into a book proposal later on,” she noted.

While Cook's experienced a wealth of academic success, she acknowledged she's had to overcome obstacles along the way.

She was often the only female in her computer science classes, which made her question whether she belonged. And as a coder, she didn't seem to fit in with journalists at times, either.

Feeling like a black sheep in both disciplines, she almost gave up.

“There were definitely times in the last three years where I felt very uncomfortable and didn't want to continue,” Cook recalled. “I actually considered dropping out of UGA for a while to go work because I was just done with it.”

But she stuck it out, and she's glad she did.

“It's been a good lesson in just perseverance,” she said. “That it's okay to be different; it's okay to feel uncomfortable sometimes.”

From these personal experiences and her research emerged the topic for Cook's TEDxUGA 2014 talk: You do you feminism. (Watch the complete talk below.)

As Cook reflects on her time spent at Grady College, she most fondly speaks of the encouragement and guidance she's received from professors – chiefly Barry Hollander, John Greenman and Keith Herndon – and their willingness to allow her to explore her out-of-the-box ideas.

She's also grateful for the professional connections she's made through the alumni network.

“I think that I've gotten so many experiences and opportunities at Grady that I would not have gotten somewhere else,” she said. “There's a lot of room at Grady to forge your own path, and that is really palpable.”

In addition to what she takes away from her college experience, Cook leaves behind legacies that she hopes will endure.

The Cox Poynter Leader and Grady ambassador founded and led for one year the UGA chapter of the Online News Association. She held the title as first-ever multimedia editor at The Red and Black. She also assisted in teaching an interdisciplinary special topics data journalism course.

Through it all, she's never been too busy to mentor others.

“I've had a lot of women tell me that they've started coding because they saw me doing it and I've convinced them to do it,” she said, grinning ear to ear. “When I hear that, it's so exciting to me and I'm just like, `Great! Let me know if you need any help!'”

Following graduation, Cook plans to travel abroad with her fiancé before moving this summer to Washington, D.C., where she has accepted a position as a data reporter at U.S. News & World Report.