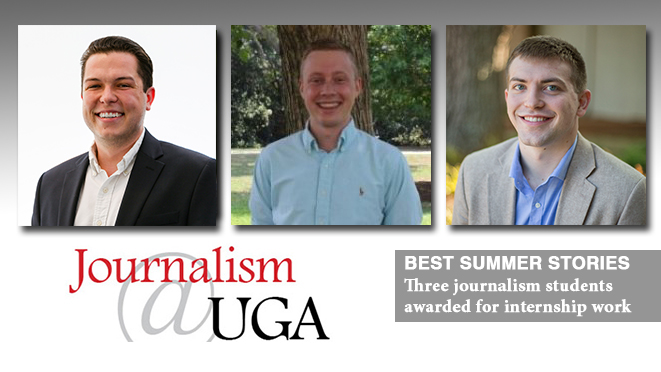 Student journalists who— during their summer internships—reported on youth poverty, credit card fraud and the trend of retiring with debt have been selected as winners of the Grady College Department of Journalism’s second annual “Best Stories of Summer” contest.

Seniors Daniel Funke, Dillon Richards and Will Robinson each will be awarded a $250 prize.

“Grady Journalism students spend their summers working for all sorts of news organizations, and from reports I get from supervisors, they do a fantastic job,” said Janice Hume, department head. “We wanted to honor the top summer stories to celebrate their success. These three winners represent the best of a whole lot of terrific work. I couldn’t be prouder of them.”

Though daily reporting wasn’t part of Daniel Funke’s job description as a web intern at the Los Angeles Times, he pitched a story to the metro editors anyway. “I wanted to go out of my comfort zone and report on an issue that I saw to be of great importance to the LA area —youth poverty,” said Funke, who was also a winner of the 2015 “Best Stories of Summer” contest. “In particular, I was interested in writing a story about the state of LGBT youth homelessness in Southern California through the lens of someone who experiences it every day.”

For the piece, Funke interviewed Kaleef Starks, a transgender African-American woman, at a transitional housing facility in Hollywood.

“Her story served as the springboard for the rest of my reporting,” Funke said, “which found that services catered specifically to LGBT youth are lacking in LA—despite the fact that they make up a large proportion of that population.”

At the Atlanta Business Chronicle, Will Robinson wrote a standout story about how Dave Polstra, co-founder and partner of Brightworth, used his finance skills to help a ministry become debt free.

“The profile was the first story I was assigned at the Chronicle. A profile was also one of the first assignments I ever had for Grady,” said Robinson. “The way I conducted my interview, structured my article and decided on quotes were all affected by my News Writing and Reporting lab.”

In another story, Robinson tackled the issue of retiring with debt “because I found many sources who felt it was a rising trend,” he said. “My editors helped me understand what questions the Chronicle’s readers would have so I could make my article relevant to our audience. I also relied on experience from writing trend stories in my Public Affairs Reporting class.”

One of Dillon Richards’ first big assignments as an intern at WMAZ-TV in Macon was to profile new upgrades at the stadium where an Independence Concert was to take place.

“I knew, from all my training at Grady, that I needed to find someone who loved the stadium and worked hard to make it as good as it could be,” explained Richards. “Once I found him, I spent a day in the hot sun getting all the video I needed, but also making sure I got all the sound I needed —the sound of him rattling chains, cutting wood or unlocking a door—the things that make you feel like you’re there with him.”

Richards also covered hard news, such as his report on how consumers can protect themselves from credit card fraud.

“My professors taught me that news matters and that words matter, and that was something I learned over and over at WMAZ,” said Richards. “Because of Grady, I knew never to give up on a story, and, because of that, I was known for always bringing back a great story no matter what I was assigned.”