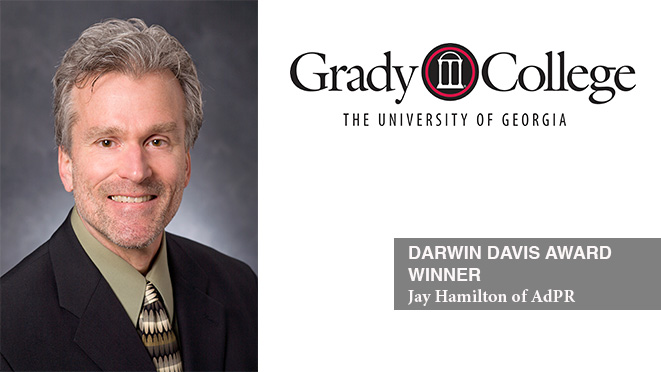 Jay Hamilton, associate professor of advertising, has been named this year's recipient of the Darwin Davis Award.

Made possible by an endowment from Dean Emeritus Cully Clark and his wife Mary, the honor was established to recognize a member of the Grady College faculty or staff whose performance reflects those qualities of dedication and friendship that best capture the “Grady Spirit.”

Hamilton is appreciative of the honor.

“This spirit is not only one person's own attitude or temperament, but what everyone in this college does to help us hang together and to move forward together,” he remarked.

The award is named for Arthur B. Darwin and Harold E. Davis, notable alumni of Grady College. Hamilton will receive a $1,000 monetary gift and an honorary plaque.